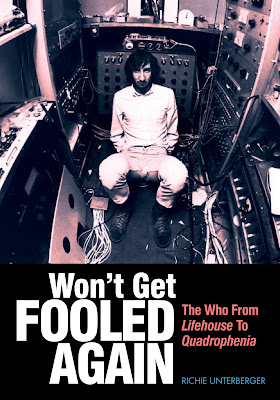 The next best thing to rock 'n' roll is reading about rock 'n' roll. There's a whole feast of music books out there with more and more big names lining up to release autobiographies. One of the finest music books I've read recently is Richie Unterberger's Wont Get Fooled Again. An insightful, thoroughly researched account of a fascinating period of The Who's history. There are not many writers who could have done such a sterling job. Based in San Francisco, Unterberger has been at the coalface of music journalism for over 25 years, having contributed to publications such as Ugly Things, Mojo, Record Collector and Pulse among others as well as penning books on The Velvet Underground, The Beatles, Jimi Hendrix, The Byrds along with two books celebrating lesser known artists (Unknown Legends of Rock'n'Roll, and its sequel, Urban Spacemen & Wayfaring Strangers: Overlooked Innovators & Eccentric Visionaries of '60s Rock). On top of this he's also written many liner notes and is a much  respected travel writer.

I recently contacted Richie to see if he'd be willing to answer some questions for my humble blog. Good guy that he is, he said yes.
Click over the jump to read for the interview.
Read more »
at 20:22 No comments: Links to this post