Squire - Get Ready To Go! 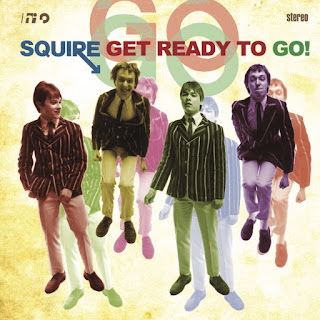 
There's a cliché within music biz circles that there's always a folk revival going on, whatever mainstream musical fashions may be. In these days of global, internet-connected scenes you could say the same applies for any musical genre. Especially Mod. That said, the first Mod revival at the tail-end of the 1970s stands out as something quite special. The Jam of course led the pack, and The Who's Quadrophenia movie helped attune youthful ears to the sounds of of the previous decade.

One band at the centre of all this was Squire, who released a couple of classic singles on Arista, and were one of the scene's must-see live acts. I have to admit to being unaware of the band before hearing Get Ready To Go!, a newly released album that rounds up their early demos. The bulk of the tracks on Get Ready To Go! Were recorded on a TEAC 4 track machine by brothers Anthony and Kevin Meynell to present to the other band members in order for them to learn the songs. What strikes most about the album, apart from the sharp 'n' savvy musical moves is how it captures the tail-end of the '70s. Youthful energy had been fired up by punk rock but now bristled against the realities of everyday life. Find work, find that love doesn't always work out, find that Radio One still playlists the blandest of the bland.

The demos on this collection address these concerns with wit, brio, and an infectious energy. It's modernist for sure but mixed with punk and pop. Catchy three minute songs laced with to-the-point lyrics. 'Lets Have Some Fun' mixes hope and cynicism at the promise of summer. 'Tesco Music' pokes fun at the corporate music business. There are songs about the lure of big cities, the pains of finding work and your place in the world. The cumulative effect is akin to a teenage diary in song form.

A good indicator of any band's worth is often their staying power, and I'm pleased to report that four decades on Squire remain active today. In addition to the demos are some 1978 mixes and a new song 'I'm 21', which casts an eye back over the ensuing decades.The band clocked up over 30 gigs in 2019. An impressive number whichever way you look at it. It's well worth connecting with their social media channels to find where and when you can see the band play live.