The Blues Against Youth - Apprentice 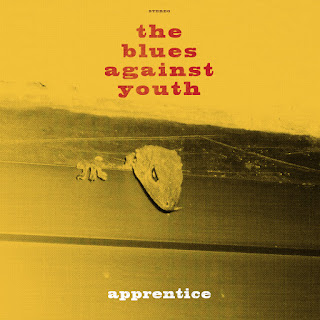 The third LP from Italy's Gianni TBAY is that rarest of beasts, a blues album that appeals to purists and neophiles alike. Firmly rooted in delta and country blues but infused with a 21st century suss and swagger, it's suitable for back-porch or boutique festival alike. This time round the one-man band has enlisted some backing from his musician pals to flesh out his take on gutbucket blues.

TBAY's primitive beats and sophisticated lyrics, honed via relentless gigging, are intact throughout the album's twelve tracks, but benefit from the input of the extra musicians. (Check out the virtuoso guitar shredding on 'Boundless' or wailing harp on 'Barbed Times'.) Unlike a lost of blues records there's enough variation to keep the listener interested; party blues, stomping blues, travelling blues, plaintive slide-guitar laments, it's all there! Equally at home playing Southern boogie (Somebody Settles Down) or paying tribute to his country influences via the album's sole cover (Hank Williams' Lonesome Whistle Blow) TBAY's latest outing has a train load of authenticity and spirit. Hitch a ride why dontcha! 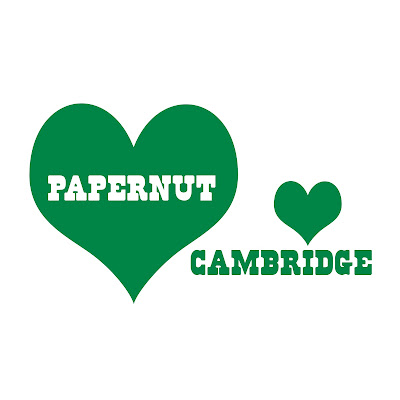 
We've covered Papernut cambridge's last two LPs on Harmonic Distortion before, 2014's There's No Underground and last year's cover set Nutlets 1967-80. Both great albums, but incredibly the band have found an extra gear. Their latest album, Love The Things Your Lover Loves, continues the theme of the preceding records ('70s-inspired upbeat glam-pop) but brings it into sharper focus.

Papernut Cambridge are a loose collective put together by head 'nut Ian Button, a musician who first came to prominence in the 1980s with Thrashing Doves and is perhaps best known as guitarist for Death In Vegas. For all his his '80s success and art-rock renown he comes across here as someone who thinks music peaked in 1973 with David Essex's “Rock On”. He might just have a point!

Love The Things Your Lover Loves features music that's informed by the soundtrack of childhood, but not in a wistful, nostalgic, life-was-better-then way, there's more of a positivity about it, it's more upbeat and celebratory. Call it Happy Hauntology if you want a genre. Button's take on retro-ish, warm, humanistic pop for now people has reached a new peak.

Whether celebrating fine monastic wines (Chartreuse), appreciating your loved ones (title track), or exercising some lyrical whimsy (St Nicholas Vicarage) the album has a much need optimism and feelgood factor about it, which chimes nicely with it's early summer release. This is complimented by the simple but effective artwork - a refreshingly simple two-coloured heart logo that's crying out to be stencilled onto a brick walls all over the country.

As always with Papernut Cambridge the album comes in a variety of different formats and options, full details of which can be found on the band's website. A special treat for analogue fans is the vinyl version which comes as two white vinyl 10” housed in a High Street style carrier bag (and true to the '70s spirit they won't charge you an extra 5p for it!) 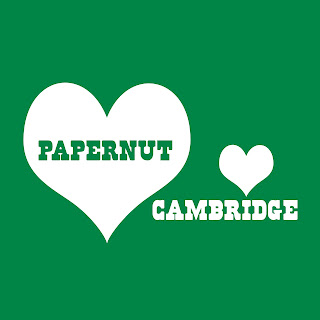 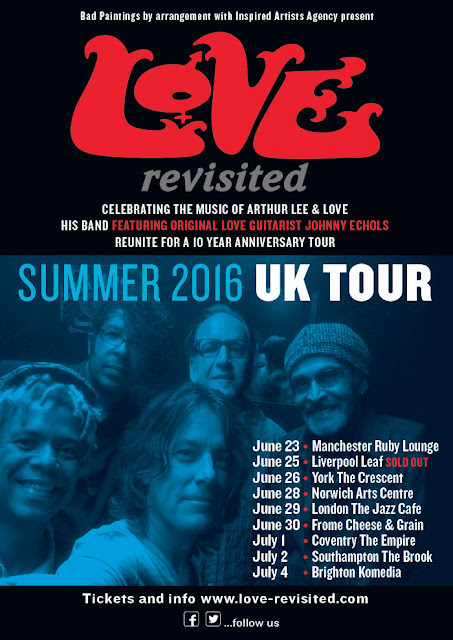 Celebrating the music of Arthur Lee and LOVE, his band reunite for a 10 year anniversary UK tour.

From 1993 until Arthur’s death in 2006, the band Baby Lemonade performed with him, being an essential part of the renaissance of LOVE’s music. This iteration of LOVE saw many sold out tours, as well as back to back Glastonbury performances and an appearance on Later with Jools Holland.

Joining Baby Lemonade is LOVE’s original lead guitar player and founding member Johnny Echols, who was part of the classic line up that recorded the seminal Forever Changes.

Johnny Echols and Arthur Lee were childhood friends whose families both moved from Memphis to Los Angeles. Teenage Johnny & Arthur teamed up to form the groups Arthur Lee & The LAG’s and the American Four before they formed LOVE in 1965. The classic LOVE line up featuring Johnny disbanded in 1968. Johnny reunited with Arthur Lee in 2005 to perform with LOVE once more.

Baby Lemonade formed in 1992 by Rusty Squeezebox, Mike Randle, David “Daddy-O” Green, later adding Dave Chapple to the mix. In 1993 the band landed the gig of a lifetime opening up for LOVE. That show was the last for that incarnation of LOVE as Arthur replaced them with the 4 Baby Lemonade members. Baby Lemonade released records on Sympathy for the Record Industry, Munster and Big Deal between 1993 and 2001.

After nearly 6 years in prison, Arthur’s case was overturned and shortly after, at his request, Baby Lemonade began rehearsing for what would be non-stop LOVE touring throughout North America, UK, Europe and Australia between 2002 and 2005 where they enjoyed unprecedented success with sold out tours, back to back Glastonbury performances, Roskilde, Royal Festival Hall and an appearance on the Later with Jools Holland TV Show.

In 2016 LOVE revisited will celebrate the music of LOVE and mark Arthur Lee’s passing by reuniting for a 10 year anniversary UK tour.

For details and tickets visit www.love-revisited.com 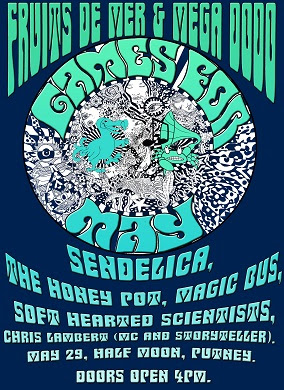 You have to love the month of May in merry old England! The sun and heat has finally arrived, there's not one but two Bank Holidays, the festival season is just around the corner, and it's also time Games For May, the all-day music event that's become a must-attend for any self-respecting psych fan. Jointly hosted by Fruits de Mer Records and Mega Dodo Records

As well as the four live bands appearing, (Sendelica, Magic Bus, The Honey Pot and Soft Hearted Scientists. More on those below), there'll also be a mini record fair with lots of rare and exclusive items from both labels and all the bands. Worth spending the day indoors I'd say!

All legitimate ticket holders will receive some free items on entry including a 4-CD set featuring the four bands along with a bonus CD of acoustic guitar instrumentals by Scott William Urquhart.

One of the exclusive records for sale will be a rather wonderful lathe-cut 8” (yes that's eight inch vinyl!) tribute to David Bowie. It features Cary Grace doing Black Country Rock and Sound And Vision which segues into Consterdine's version of Sound And Vision. Only 50 copies are up for grabs so get 'em while they're hot as they say. (Or spend a week's wages tracking one down on Discogs!)

Here's more about the 4 bands -

Sendelica
Welsh Spacerockers. Their epic new album Cromlech Chronicles is out next week. We'll be running a review soon! Their contribution to the 4-CD set is an exclusive mix of highlights from their 10 years of music making. Check out their recent Ziggy Stardust 7".

Unfortunately I'm unable to attend but you should! Tickets from the link below. Don't hang about! 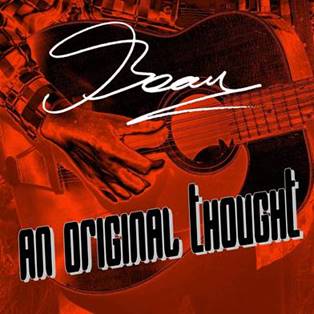 Almost a year to the day since Beau's previous album Shoeless In The Desert, the ever prolific Norfolk-based songster has a brand new 13-tracker released digitally by the good folks at Cherry Red Records. An Original Thought has all the hallmarks of a classic Beau album; the every present Harmony twelve-string guitar backing, lyrics that veer from the wry, to comic, and to poignant, along with the astute and compassionate commentary on society's foibles.

This time round the subject matter is, if anything, even more varied. There are the big themes of religion, patriotism, war and peace (The Thinking Of God, A Peace That's Bad). Politicians and tabloid journalism are also subject to Beau's critical eye (Skeleton's Dance), but there's light relief and celebration of the good in humanity too, our ingenuity and ability to invent (Everything's Possible), showbiz comebacks (The Trotter Sisters). It's all done in a manner we've come to expect from such a talented songwriter, the songs are funny but never frivolous, playful but never without a point. Amazingly the album was written in just 2 weeks, in what Beau describes as “... my most intense writing phase ever, even going back to my twenties!

Famously championed by John Peel, Beau featured on the DJ's Dandelion label back in the Perfumed Garden era. Of course the musical climate has changed massively in the intervening decades. Admirably Beau has stuck to the basic principles of what makes his music truthful and honest, rather than indulging in fads and fashions. His songs are recorded without unnecessary studio trickery or technology led instrumentation. All the songs are based on having something to say rather than filling out an album to push “the single”. This might make him something of an anomaly in the current climate but it's something that should be applauded. More power to his elbow!

If you're unfamiliar with Beau's work and want to find out more, check out his previous albums ShoelessIn The Desert, Fly The Bluebird and Twelve Strings To The Beau.

The La's - Roots and Influences - A Spotify Playlist 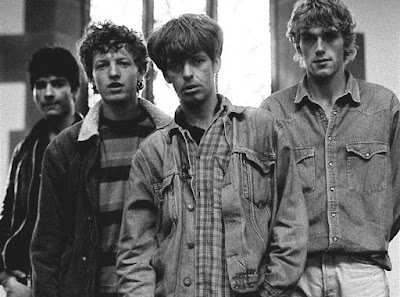 Still up there in my all time top gigs is when I saw The La's live at Hull University back in the day. It was one of the few times I've been right at the front. I was, am, and will always be a proper fan-boy where this group are concerned. Hell, I still have the red rattle 'n' roll T-shirt I bought that night (and sometimes still wear it!)

There's been a disproportionate amount of column inches written about the band, considering the small amount of music they actually released so I'm not going to add to that (not yet anyway). What I will do however is post this Spotify playlist for you all to enjoy. It's highlights some of the acts that inspired Mavers & co. Some will jump out as obvious influences, be it the rhythm guitar and harmonies of the Everly Brothers, the almost skiffle sounds of Buddy Holly and the Crickets, and of course that other Liverpool band of note, Johnny & The Moondogs, included here twice in their better known guise as The Beatles.

Others may not be quite so obvious but are still worthy of inclusion, mainly because the band has cited them as influences (in the case of Sweet and The Gypsy Kings). I have no idea whether they ever liked the Hollies (quite possibly not) but 'Carrie Anne' could well have been written by Mavers so in it stays! Suggestions for additional tracks and artists are very welcome in the comments box. 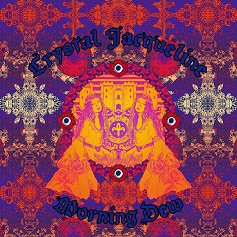 I've written about Crystal Jacqueline's music before, with her most recent album Rainflower becoming something of a soundtrack to last summer. This four track EP maintains the high standard and contains three well chosen covers and one brand new original song. Jacqueline is ably backed throughout by her partner and musical collaborator Icarus Peel.

The EP opens with a five minute version of Bonnie Dobson's 'Morning Dew', stealing it away from its folksy roots and into ethereal dream-pop territory. It's quickly followed by a brand new original song, 'Ivy'. Multi-tracked vocals backed with finger-picked guitar and synth washes, it's short but sweet and bodes well for any future full album plans.

The remaining two tracks are well chosen covers of obscurities. (well, obscure to me anyway!) 'Moonsong:Pelog' is so perfectly suited to Jacqueline's voice it could well be mistaken for self-penned but it's actually by written by Joe Byrd and The Field Hippies and first appeared on the band's 1969 LP The American Metaphysical Circus.

Rounding off the EP is 'Sally Go Round The Roses', a song by one-hit-wonders The Jaynetts. Eschewing the R&B feel of the original for something more psychedelic and majestic, it's a triumphant end to this four song odyssey. As ever buy with confidence!