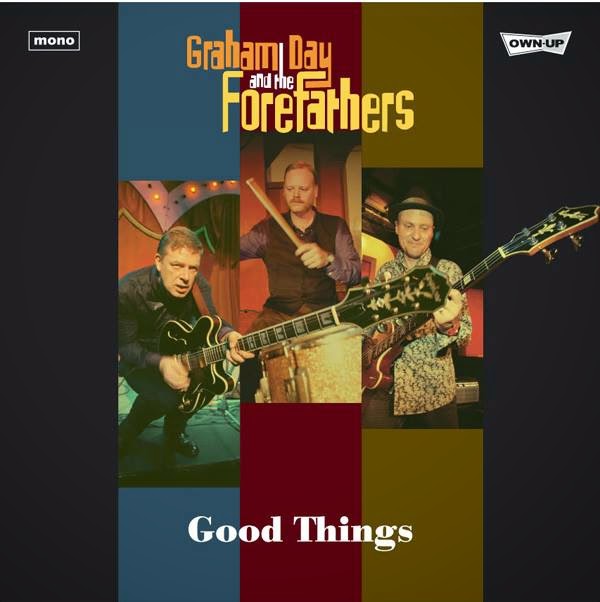 Medway garage legends take a trawl through their own back pages on new album.

Don't look back. So have said such wise luminaries as John Lee Hooker, Bob Dylan and Oasis through rock's history. Admirable sentiments, but in their defence they probably weren't familiar with the recorded output one Mr. Graham Day. As a member of The Prisoners, The Prime Movers and The Solarflares, as well as more recently in The Buff Medways and Graham Day & The Gaolers, Day has lit up the garage rock firmament for over 3 decades.

After a debut single earlier in the year (Love Me Lies on State Records), the band are now releasing Good Things, an album that's made up of newly recorded versions of Day's songs from his time in The Solarflares, The Prisoners and The Prime Movers. There's also room for a couple of tracks from Day's most recent band, Graham Day & The Gaolers.

Good Things is the first LP on the newly resurrected Own-Up Records and is everything you'd expect from a Medway garage record. A mix of '60s R&B, mod-rock swagger, and incendiary power trio bite. With the backing tracks recorded quickly and live in one session and vocals added later via computer, (the one concession to modern techniques), it has that eternal raw garage feel that never seems to lose its appeal.

There's a rare level of intuitive playing and understanding between the trio that can only have come by having shared countless gigs. By covering songs from your own back catalogue there's always a danger of treading water, but there's more attitude and sonic attack on this album than most bands half their age could muster. Make no mistake, this is no half-arsed re-hash.

It's an album that works well as a alternative greatest hits set, though if this is your first experience of the Graham Day sound it will certainly whet your appetite for a more detailed delve into his previous records. You could argue that by re-visiting their own songbook Day & The Forefathers are resting on their laurels, but when the results sound this good frankly who cares.

Click here for more on Graham Day & The Forefathers.
at 20:57 No comments: 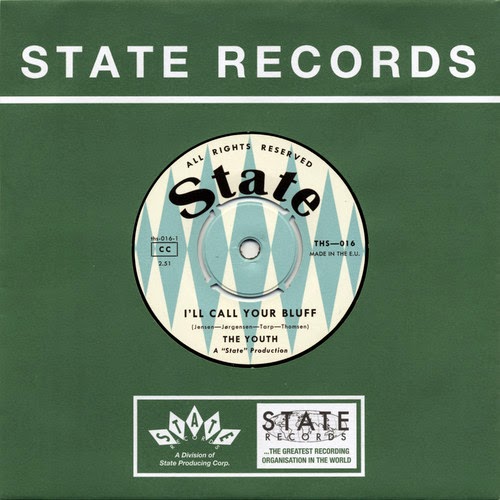 
State Records' latest release sees label owner Mole at the control desk, this time at Ponswood Hit Factory up the road in Hastings as opposed to the label's usual in-house facilities in Kent. The results are no less impressive, with both sides of this limited 7” hitting a sonic sweet spot.

Though the band hail from contemporary Copenhagen, The Youth's sound is pitched somewhere between 1961 at Liverpool's Cavern and 1963 at Eel Pie Island. The Youth have a classic two guitar, bass and drums line-up, the vocal are shared between the band's frontline.

“I'll Call Your Bluff” features some Lennon-esque vocal bite from guitarist Lasse Tarp. Like a raw out-take from A Hard Day's Night deemed to rocky for the Fabs' teenybopper fanbase. It's just the ticket for today's garage community however.

Flipside “You've Done Me Wrong” has an equally attacking lead vocal from bassist David Peter Jørgensen, over a groovy take on the Louie Louie riff. Available now on limited 7” vinyl with a push-out centre. Back to mono indeed! 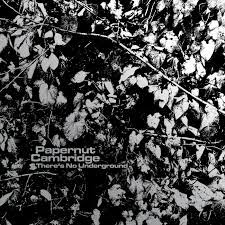 Refracted glam meets bubblegum and Brit-pop for a sadness-tinged postcard from the end of the line.


Papernut Cambridge may well be the best ever composite band name for anyone wanting to evoke an aura of Englishness, nostalgia, soft psychedelia and a hint of autumnal melancholia. The right name choice then for a band whose music contains all these things and more.

Papernut Cambridge is the brainchild of one Ian Button, former member of Death In Vegas turned music producer and drummer for Wreckless Eric no less. For this, the band's second long player he's drafted in a loose collective of pals that include former Hefner frontman Darren Hayman, Death In Vegas bandmate Mat Flint and three quarters of the Mary Epworth band.

There's No Underground is an album that only someone of a certain age could have made. In some ways a tribute to the pre-punk '70s, when bubblegum pop and glam-rock ruled the charts and airwaves. A Cloud Fallen Down From The Sky brings to mind Terry Jacks' Seasons In The Sun, Nutflake Social is bubblegum pop that borrows melodically from Rocky Horror's The Time Warp, while Accident's Children takes late-era T Rex as its sonic template those records when Marc was getting turned on to sophisticated New York soul and disco.

A lot of artists and albums have mined this era, Denim's Back In Denim, Vinny Peculiar's Other People Like Me and The Dirtbombs' Ooey Gooey Chewy KaBluey! being just three that spring to mind. What sets There's No Underground apart is that it's no nudge-y in-joke. Although inspired by the pop-tastic early '70s it has a strange suburban sadness running through it. Perhaps due in no small part to it's end-of-the-line geographical genesis. (The album title refers not to some comment on today's musical climate, but to Ian Button's home on the edge of south-east London). For all this the tunes are still as catchy as a keep-net.

There's No Underground is available on a variety of formats (including a triple 7” pack), each containing different mixes and alternate takes. Take your pick! Whichever format you choose you won't be disappointed by the songs. 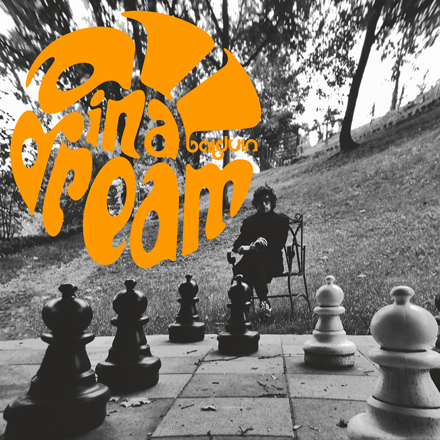 Handsome Jack - Do What Comes Naturally 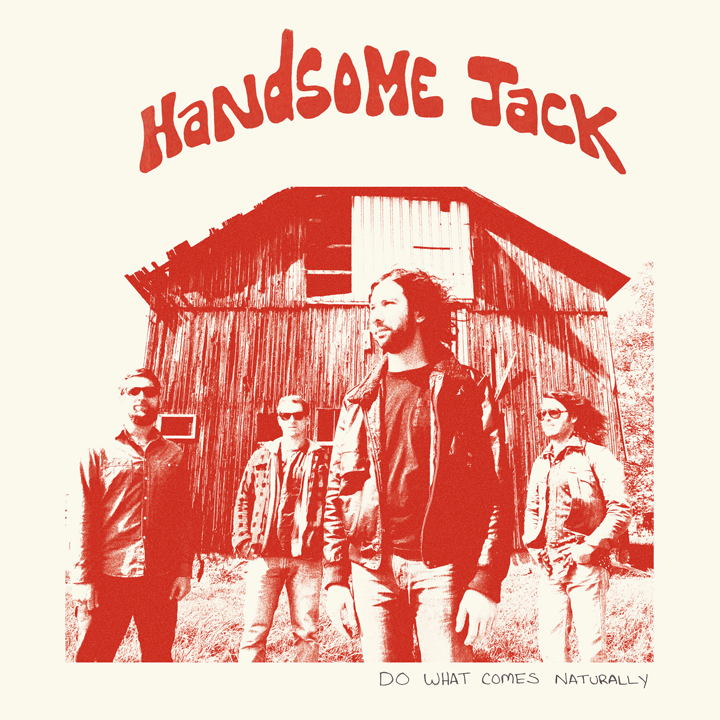 The Blues is a wheel that keeps on turning, a gift that keeps on giving. The recent popularity of The White Stripes, The Black Keys, Seasick Steve et al, have made the blues newly accessible to mainstream ears. Unlike jazz it seems to have avoided becoming a dead form, ironically by not changing that much. The same three chords, same subject matter and same delivery have served it pretty well.

The latest band to breathe new life into this old form is Handsome Jack, a quartet from Buffalo, NY. Their debut album Do What Comes Naturally doesn't serve up anything particularly revolutionary but as the title suggests they make music that feels right, and feels good, from the blue-eyed soul burr of the vocals to the in-the-pocket funky rhythm section.

Unlike the White Stripes' punked-up take on the blues, or the Black Keys indie-funk makeover, Handsome Jack have opted for a more organic blues/soul reunification, one with it's roots in the deep southern states of Mississippi and Tennessee as opposed to the NY zip-code that Handsome Jack call home.

Much like the LPs Albert King made for Stax Records, the music here is laid-back, groove-laden and soulful. The band's roots in garage rock are betrayed by the record's bourbon-soaked rawness, but it's a blues record at heart, albeit one that owes as much to '70s funk and late '60s blues rockers Canned Heat as it does to the electrified Chicago blues of John Lee, Muddy and Wolf.

Produced by Zachary Gabbard of label-mates The Buffalo Killers, the record essentially captures the band's live sound with some subtle additions - sumptuous Hammond organ (courtesy of The Lemon Pipers' Bob Nave), the occasional harmonica solo, and some Sweet Inspirations-esque backing vocals. Do What Comes Naturally is a fine addition to the contemporary blues cannon and a disc that'll nicely soundtrack any blues house party.

Click here for more on Handsome Jack.
at 16:59 No comments: