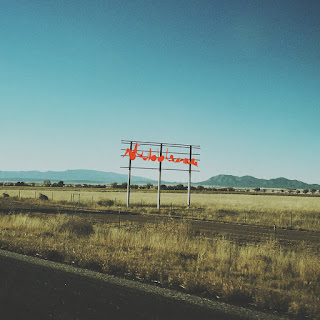 An electronic travelogue though the American landscape. An understated subtle success.


Journeys across America have long held a fascination for those of us on this side of the pond and have also inspired great art. Cinema gave us the golden age of western films and along with a number of classic road-trip movies. Musicians have taken been similarly taken with travels across the USA. 'Route 66' is the first song that springs to mind. Then there's The Beach Boys' SMiLE which was was conceived as a musical journey across America, east to west, beginning at Plymouth Rock and ending in Hawaii.

Romanticised visions of history can be misleading. Contemporary realities more nuanced, stranger and ultimately more interesting. It's this modern, complicated America that's inspired this debut album from Stubbleman, the alter-ego of composer Pascal Gabriel. Mountains and Plains is an eleven track album that took root during a ten-week journey across the States, Pascal starting each track using found sounds and field recordings as the basis of each track, taking in such locations as Northern New Mexico, Mesa Verde in Colorado, the Mississippi river, Highways 61 and 66. Along the way there were meetings with artistic communities and makers of outsider art, and inspiration taken from the endless wide-open plains, train tracks, crumbling towns and the curious juxtaposition of rural poverty against giant corporate wealth.

Mountains and Plains is a wide-screen cinematic journey at times dark and ominous, sometimes full of joy, wonder and optimism. The ambient instrumentals, akin to Sigor Rós and Brian Eno transported to the American mid-west, are always evocative, with an understated subtle power that never fails to engage and emotionally resonate. The music is at times sparse, elsewhere dense with electronic pulses made on Modular synths, but what holds it all together is the humanistic warmth which comes with the addition of plaintive piano chords and melodies that sit atop of the arrangements. It's impressionist, cliché-free and parsimonious music at its best.

Though this is his debut album as Stubbleman, Pascal has had plenty of previous musical success. He was one of the co-writers behind both 'Theme From S'Express' (S'Express) and 'Beat Dis' (Bomb The Bass) and has been the go-to production and writing choice for a wide array of artists ever since. This wealth of experience has no doubt informed Mountains and Plains as much as the journey across America. Gig goers will be able to experience the music in a live setting as Pascal will be performing a selection of live dates starting this Spring. For more details along with some excellent photographs to accompany the music, follow the links below.