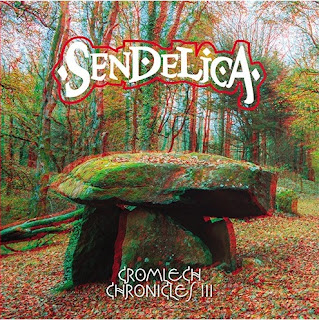 Here on the flat mud-banks of the east coast, we're about as far from West Wales as it's possible to be on Britain's main landmass, both in terms of distance and landscape. That may be why each time I've spent time in that beautiful country I've come home with my batteries spiritually re-charged. The combination of hills, valleys, clean(er) Atlantic air, rich folklore and a less-toxic national pride inspires and impresses me each time. All these things feed into the music that's made there too of course. Those teenage years spent listening to John Peel spin the latest record from Datblygu opened my ears to a seam that grew richer as more musicians came to my attention. Be it the Cool Cymru of the Manics, SFA et al, the gentle psych of Gorky's and CaStLeS, or the acid-folk of Meic Stevens, it was clear that Welsh music at its best had that elusive “it”.

All of which brings me to this new outing from Sendelica. It's the third in their series of improvised get-togethers. For the “Cromlech Chronicles” sessions the band de-camp to Mwnci Studios in West Wales for two days of playing, improvising and recording. The results then released by the mighty Fruits de Mer label. I've written about a couple of previous Sendelica records, their 7” tributes to Frank Zappa and DavidBowie. Without the restrictions of interpreting someone else's songs their muse is free to take flight in whatever direction it chooses. Over the six tracks on Chromlech Chronicles III we're treated to ambient textures, soothing sax-led loveliness, and some harder edged prog-rock (opening track 'BS'). Taken as a whole there's a meditative quality that mirrors both the physical surroundings as well as the musicians' mindset, one of freedom, open possibility and a willingness to enter into the mystic.

As always with Fruits de Mer Records plenty of thought has gone into how the physical product is presented. Three being the magic number here. Chromlech Chronicles III comes on three pieces of 10” vinyl (coloured of course). Then there's the 3D sleeve and accompanying 3D glasses. It's a welcome addition to the Welsh music canon.

**The band will be playing at the Sixteenth Dream of Dr. Sardonicus Festival in Cardigan, August 3rd-5th!**