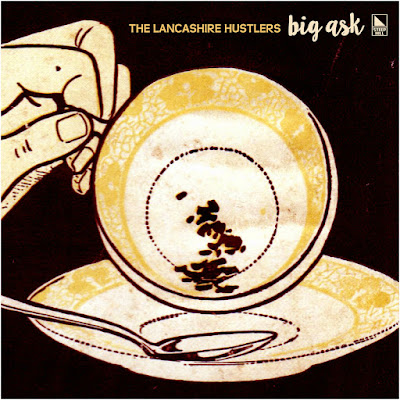 Northwest emigres search for love, truth, and beauty on their new album.

The Lancashire Hustlers are big favourites here at Harmonic Distortion. They comprise of Ian Pakes and Brent Thorley, a pair of songwriting musicians originally from Southport, who now live and work in London. Their work exists outside of prevailing fashions, and is instantly recognisable due to the duo's vocal harmony blend. They're also adept at arrangements, textures and instrumentation. Where the pair really excel however is in their songwriting. Previously they've addressed ruthless ambition, politics, corporate greed, the building of the Titanic, travel, the difficulties of art appreciation, and plenty more besides.

Their latest album, Big Ask,  came out about a month and a half ago, since when it's been a welcome companion on my daily commute to work. This time round they've not opted for the kind of grand conceptual theme that formed the basis of their earlier pop opera albums - there's no overarching narrative or storline. Instead it's an inward journey, with songs addressing the elusive nature of love and happiness. These are sophisticated songs, born of the big city, yet yearning for a simplification. In short they strip away at all that's unnecessary, and focus on the stuff that really matters - love, truth, beauty. It's a thread that runs through all the songs on Big Ask, whether wishing for passion ('Your Cool Reactions', 'You Who Only Play at Love'), lamenting joy's fleeting nature ('Happiness On a String') or appreciating the sublime beauty of the natural world ('Bluebell Painter'). They lay the writers' hearts on the line and wish that others could do the same. A big ask indeed.

One of the Lancashire Hustlers' key influences is Ray Davies of The Kinks. Much like the best of Davies'  songs, the songs on Big Ask  have a slightly removed, keen sense of observation. Whether deliberate or not the back cover image on Big Ask lends weight to this theory of Pakes and Thorley as observers. It's a photograph of the pair in a tile-walled cafe, drinking tea, their attention and eyes focussed on something happening across the room and out of shot. Who knows, perhaps what they're witnessing will feature in one of their future songs. I'd like to think so.

Anyhow, enough theorising, I'll leave you with that thought, because right now I'm off to press play again.

Interview with Trevor Deeble from the Office For Personal Development 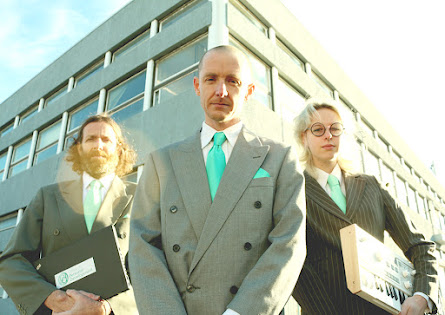 One of our favourite new bands is the Office For Personal Development. Their single 'You Are In Control' has been getting some deserved attention recently. We interviewed vocalist Trevor Deeble to find out more about the band and what the future holds for them.

There's a very strong visual/conceptual side to The Office of Personal Development. It's corporate, cynical almost, but with a knowing sense of humour. Can you tell us about what drew you to this aesthetic? 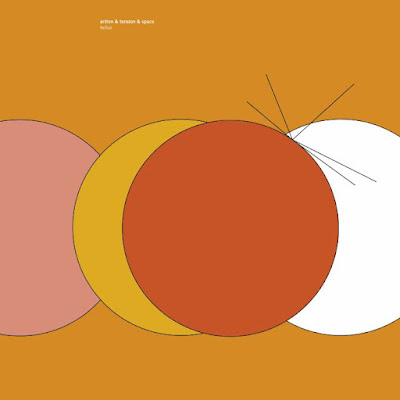 Who wouldn’t be intrigued by a band that describe itself as a “spaced out, instrumental loungerock outfit, with added vibes of folk music, jazzy surf, psychedelia, free improvised chill-out, jangly post-rock and travelling bass”? I certainly am, but before I listened to Action & Tension & Space’s latest album Tellus, I was drawn in by the sleeve art. Several coloured spheres, simply rendered in bold colours, tell you little about the music therein, but that was part of the charm. It looks like the work of Dick Bruna, taking a break from drawing Miffy. Do they represent planets? Snooker balls? An illustration to show a mathematical law or physics experiment? Probably none of those things. The sleeve had done its job, I was taken in and keen to listen. And Tellus does not disappoint!

So, who exactly are Action & Tension & Space? They’re a group of musicians from Haugesund on the west coast of Norway, made up of members from groups such as Electric Eye, Lumen Drones, Undergrünnen, and The Low Frequency in Stereo. Tellus is the group’s fourth long-player and one that has me gripped from beginning to end. It’s comprised of five tracks, each with a unique mood and feel. They’re stretched out with extended improvisation which never feels forced, false, or unnecessary.

‘Chromosomes’ is the album’s opening track, a Krautrock-ish number with guitar arabesques that have something of Will Sergeant about them. Repetition rubs up against mutation here in a most pleasing way. ‘Tellus’ follows, further encouraging a meditative state. Perhaps the calmest, most chilled track on the album. In many ways the calm before the storm…

‘Trinity and the Holy Ghost’ is the album’s mid-point storm, and my favourite track of them all. A ten-minute finger-snapping, mutating epic with a 5/4-time signature, underpinned by a killer double bass riff. By the time it finishes I just want to play it all over again.

But then I’d miss out on the following number ‘Schweppes and Koskenkorva’. Named in honour of the mixer and Finland’s famed clear spirit drink, it has a suitably hazy, intoxicating vibe. Oddly it conjures up images of sun-soaked North Africa and the Middle East rather than Scandinavia’s icy climes.

Those are saved for album closer ‘The Last Petrol Station Before Hardangervidda’. According to the press release, Tellus was recorded in a tiny studio on the Norwegian coast as a heavy storm came in. This track has that ominous, stormy feel. Music that says the dark clouds are approaching. It all adds up to an album that’s hypnotic, swirling, transportive, and groovy. There’s action, there’s tension, there’s space, and a whole lot more.

Tellus is released by Rune Grammofon on March 25th