The Beach Boys: Made In California (6 CD Box Set) out on 2nd September 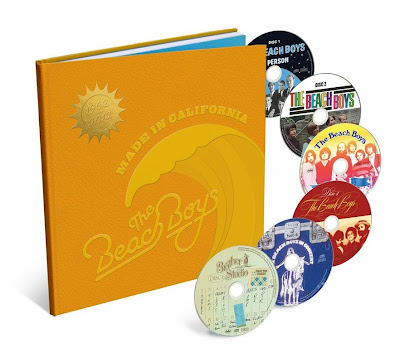 The Beach Boys have opened their archives for a new career-spanning, six-CD collection titled Made In California, capping the legendary band’s 50th Anniversary celebrations. Made In California features more than seven and a half hours of music, including more than 60 previously unreleased tracks.  The deluxe set is presented in a high school annual-inspired hardbound book with personal recollections from the band’s members, replicated classic artwork and memorabilia, photos from the band’s archive, and handwritten yearbook-style inscriptions from Beach Boys Brian Wilson, Mike Love, Al Jardine, Bruce Johnston, and David Marks.

Produced by The Beach Boys and The SMiLE Sessions’ GRAMMY® Award-winning team of Mark Linett, Alan Boyd, and Dennis Wolfe, Made In California chronologically charts the 50-year career of America’s Band, from their earliest demos to their most recent recordings.  With huge hits and rare gems including never-before-released original songs, home demos, alternate takes and mixes, and live concert, television and radio performances, the set showcases the breadth and diversity of The Beach Boys’ recorded catalogue and illustrates the band’s unique and evocative West Coast story. 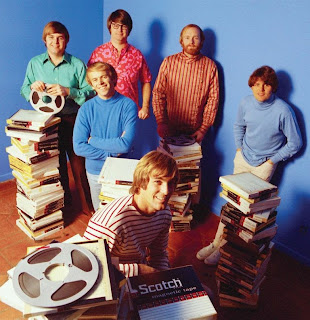 Made In California’s memorabilia includes Brian Wilson’s 1959 high school essay titled “My Philosophy,” which is reproduced in the collection’s book in its original handwritten form (the original is currently on display in The GRAMMY Museum’s yearlong Beach Boys exhibit celebrating the band’s 50-year career).

Made In California’s previously unreleased and long sought-after recordings include “Goin’ To The Beach,” “California Feelin’,” “Soul Searchin’,” “You’ve Lost That Lovin’ Feeling,” and “You’re Still A Mystery,” among others.  The set also debuts 17 unreleased live recordings, and features a special ‘From The Vaults’ disc of rarities selected by the band and the producers with longtime Beach Boys fans in mind.

One of the most iconic bands in popular music history and America’s first pop band to reach the 50 year milestone, The Beach Boys have performed and recorded the world’s favourite soundtrack to summer since 1961.
at 16:27 No comments:

Email ThisBlogThis!Share to TwitterShare to FacebookShare to Pinterest
Labels: The Beach Boys 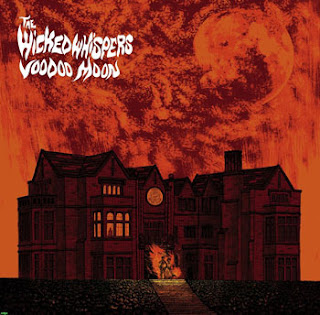 Liverpool's Wicked Whispers have released a follow up to previous 7” “Dandelion Eyes” (Read my review here). It's called “Voodoo Moon” and is perhaps an even more accomplished and refined affair building on their softly sinister psych sound. Authentically 60s, Farfisa organ underpins the gentle yet unsettling track, not unlike the work of Jacco Gardner. Think the Coral at their finest, or a smoother take on The Seeds' garage sound.

Flipside “Nightbird” is a more energised track which recalls early Doors, lysergically tinged and propelled by rolling bass guitar and snappy drums. Complete with guitar and sax wig-out at the end. Things bode well for a debut album.

Recorded at the legendary Toe-Rag studio, the single is out now on Electone Records. Get with it kids! 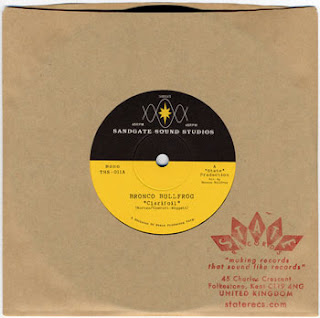 Bronco Bullfrog's ode to the vinyl packaging of yesteryear.

We live in an age when the music you buy is mostly packaged in one of either two ways – as a no frills but accessible download where the best you can hope for is a pdf booklet. Or there's deluxe vinyl versions that you need to take out a mortgage for, whose prices are pumped up by the inclusion of postcards, badges and other pieces of paraphernalia. These items are usually limited so therefore end up sitting on shelves, never getting played in fear of price-dropping damages.

It wasn't always this way though. And Bronco Bullfrog are one band who know about such matters. The newly reformed three piece have just released a single that sings the praises of clarifoil. If you don't know what that is take a trip to your local charity shop and take a look at the old vinyl LPs. Chances are one or two of them will be coated in a moisture-proof plastic coating. It may have aged slightly, cracked or bubbled up in places but you'll get the idea. As seen on a whole host of 60s vinyl releases from Matthew & Son, to Decca Eps and The Kinks on Pye. (You can learn all this and more from the wry, knowing, funny lyrics!)

Musically it's a retro-fused powerpop affair, packed with plenty of harmonies and “oooh-oooh-oohs” in all the right places. The flipside is pretty neat too - “Never Been To California” takes a wistful look at all the cliches and assumptions us lesser-travelled Limeys have about the sunshine state. Regret never sounded so funny or so much fun. The two tracks sound like songs Pete Townshend might have penned for The Who Sell Out, full of humour and good vibes. Buy with confidence!

Out now in glorious mono on State Records. (Limited to 500 copies on 7")

The Greek Theatre - Lost Out At Sea 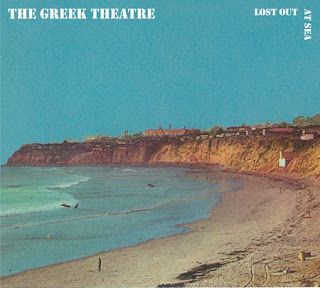 
Every now and again an album comes along that's out of step with any current fashions yet is all the more convincing because of it. This self-released debut LP from The Greek Theatre is one such album. Musically it's folksy, west coast soft-rock embellished with woodwind and pedal steel, pitched emotionally at that place that's both happy and sad at the same time.

This is music that has a hazy, sun-drenched sadness to it. Texturally soft yet with enough quiet inventiveness to be genuinely moving, this is mood music of the highest order. The album opens with a soft shuffle beat fading in over the sound of waves gently lapping. It's this referencing of the sea that's returned to time and time again lending the whole album a trapped-in-paradise introspection.

The Greek Theatre are Sven Fröberg and Frederick Persson, who along with several musician friends (including Posie Ken Stringfellow), have crafted a beautifully organic debut LP. The album was recorded in a rustic Swedish wood cabin over the summer of 2009. It must have been a very productive time and space as the pair have already written the songs that promise to be on their next three albums, after which they say, The Greek Theatre will cease to exist. They've hinted at the next album being more rooted in the Brit-folk of Pentangle, Fairport Convention and Nick Drake.

If you want comparisons for this album however there's the obvious Cali-trilogy of Brian Wilson/Love/The Byrds (or more specifically David Crosby solo), along with the folk-rock of fellow Swedes, The Amazing. There are also parallels with the baroque pop/rock of Eric Matthews. But don't go expecting The Greek Theatre to be soundalikes, these comparisons are not the full picture. Although their music is influenced by such alumni, it has a heart and soul all of it's own. This is music infused with an effortless depth that rewards more with each listen. It's an album I'll no doubt return to time after time while eagerly awaiting the next instalment.

Click over the jump for a track by track preview of the album.
Read more »
at 14:26 No comments: 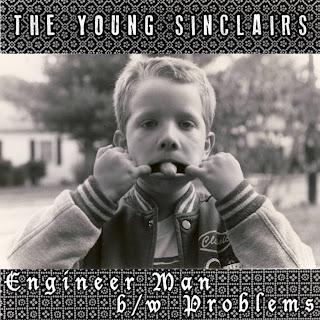 Though the track has been around for some time now, dating back to Feel Bad, their self-released debut LP from 2007, the glorious powerpop classic that is 'Engineer Man' is now available on a 7” single thanks to garage aficionado Paul Messis, the man behind Market Square Records. With a nod to Pete Townshend's third person songwriting, The Byrds' fok-rock jangle and a whole host of latter day Paisley Underground bands, lead Sinclair Samuel J Lunsford has crafted a mini pop-opera perfectly suited to the 7” format. Like an out-take from The Who Sells Out, the A-side brims with spirited energy, melodic twists and turns and exquisite harmonies. Flip it over and you'll be no less disappointed, B-side 'Problems' takes a more personal, melancholic stance. Less immediate maybe but after a couple of listens its heartfelt lyrics will carry a deep resonance for anyone who's ever taken time to do a little soul searching. It's those Who comparisons that stand out most, right down to the Keith Moon-like fills. In a fairer world this would right now be giving Daft Punk serious competition for that smash summer single crown, as it is we can keep it as our secret.

'Engineer Man' is out now on Market Square Records. (Limited to 300 copies).