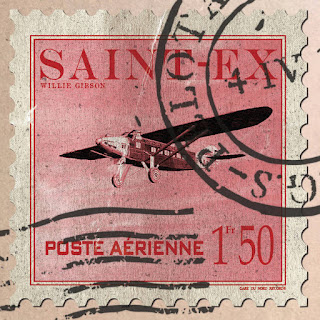 Reach for the stars. A synth-driven tribute to aviator and author Antoine de Saint-Exupéry. Out now on CD and 10” vinyl.

We hear a lot of talk these days about society “dumbing down”. I'm not sure if that's truly the case – all the young people I meet these days seem impressively well-informed and give me much to be optimistic about. And while recent events have highlighted the dangerous combination of low-information voters and lower-information politicians, it's reassuring to find that the musicians the planet over continue to embrace the cerebral. One recent release that educates as well as entertains is this here disc from Willie Gibson. It's inspired by Wind Sand And Stars, a book by aviator and author Antoine de Saint Exupéry, who's perhaps best known for writing children's book The Little Prince.

Saint-Ex is a self-penned eighteen minute instrumental journey broken down in five distinct sections. As on Gibson's previous work, Vivaldi:Seasons Change, modular-synths are used throughout though there are additional live drums and the occasional vocal lines from Deerful's Emma Winston. The overall effect is meditative and calming with the modular synths lending a mid '70s feel – think Tangerine Dream, Kraftwerk's Autobahn or side two of David Bowie's Low. It's fair to say however that these artists would not be at the forefront of Gibson's mind when composing or recording these works, this being a tribute to Saint-Exupéry.

Each of the five distinct sections is a musical representation of an aspect of Saint-Exupéry's life or work. There's the propulsive opening section titled 'Wind, Sand And Stars' where one man's conquering of the elements is rendered in musical form, followed by more tranquil sections recalling childhood memories and joy-filled flights. Sadly Saint-Exupéry went missing over the Mediterranean on a routine reconnaissance flight in July 1944, with neither the aircraft or his body ever recovered. The final section 'July '44' closes the album in a suitably climactic way, filled with both drama and celebration.

I have to admit to not being very familiar with the life of Antoine de Saint-Exupéry, my knowledge extends only to having watched the recent film version of The Little Prince. Thankfully there are musicians and composers around like Willie Gibson who continue to broaden our horizons where others would have them shut down. 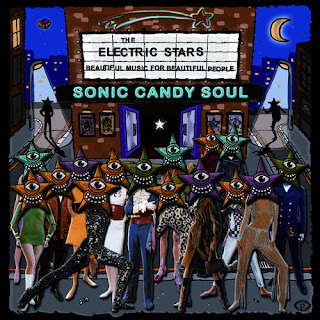 (This originally appeared on Subba Cultcha way back in 2012)


No one accuse Mancunian quintet The Electric Stars of being cutting edge, that's not where they're at. And neither are they an out and out retro act. The truth is they take what they like from music's past for their own ends. What the band's really about is the quality of their songs, and playing and serving them well. It's this sense of craftsmanship that runs through all eleven tracks on Sonic Candy Soul, their debut album for Detour Records.

From the fake vinyl crackle of album opener '136' onwards it's the attention to detail that impresses. Though essentially a guitar band they're not afraid of adding other touches, such as the trumpet solo on Stoned Again, and the dramatic piano and synths on the dark, sinister Bedtime Stories. Singer Jason Edge proves himself a fine singer and decent lyricist, perhaps best shown on Alison Williams,a modern day kitchen sink tale.

Though their main influences are the '60s beat era, the poppier side of psych, and some of brit-pop's confident swagger, there's a subtler strand of US influences that help add some soul to the English pop classicism. Not least the finger-snapping grooves of Between The Streets And The Stars, the stoned country-soul verses and Bo Diddley beat coda on Blind, and the gospel backing vocals on Stoned Again (courtesy of sometime Primal Scream member Denise Johnson).

The album is produced by fellow Mancunians Martin Coogan (Mock Turtles) and Yves Altana (Wonky Alice), with all the soft-psych tricks in their armoury – flange, gentle stereo panning, the occasional backwards cymbal. There are also clues as to the band's true live sound via the amp-crunching, rocking out of Not Man Enough. 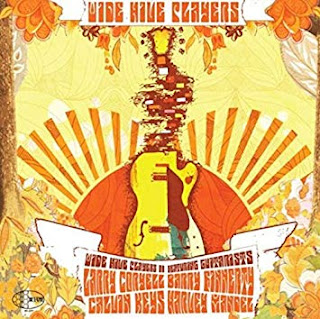 (This originally appeared on Subba Cultcha way back in 2013)


In-house label band draft in some top guitarists for an album where jazz meets soul, funk, rock and blues.

Wide Hive Players are truly an in-house affair for their California based record label, comprised as they are by musicians from across the label's roster. Label owner Gregory Howe also makes a big contribution with the compositions as well as on production and engineering duties. The band began as a live sessions project in 2009 and went on to release a well-received eponymous album of soulful, funky modern jazz.

For Players II Guitar, their second album release they've secured the talents of four guitar playing greats to come in and add some special magic to the tracks. And what an impressive line-up it is, with Larry Coryell (famed for his solo albums as well as having worked with Charlie Mingus and John McLaughlin), Calvin Keys (toured and recorded with Ray Charles as well as successful solo releases on Black Jazz Records), Harvey Mandell (Canned Heat, John Mayall), and Barry Finnerty (Miles Davis, Chico Hamilton, The Crusaders).

The result is a musical version of a four seasons pizza, each guitarists' individual style adding its own flavour to the album; there's Calvin Keys' fluid and intricate solos, Larry Coryell's expressive playing on the contemplative 'Sworn Statement', Harvey Mandell getting soulful and funky on 'Preachers Pistol', and Barry Finnerty's dexterous mastery as evidenced on 'The Paladin'.

At times laid back and languid, other times with an up-and-on-it dance floor groove, there's shades of both David Axelrod and Acid Jazz across the tracks. Despite the guitarists taking top billing, this is a definite group effort with the brass and rhythm sections in fine supporting mode. If such a collaboration had happened in an era when jazz was a more popular, less niche musical form no doubt this album would be big news. As it is, it may just be a secret waiting to be rediscovered.