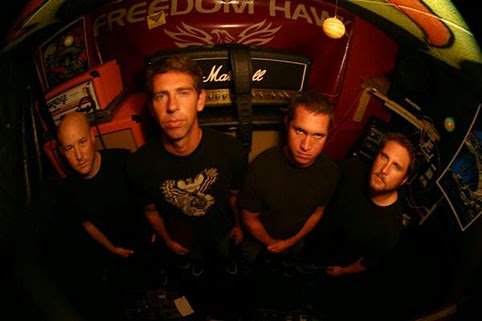 One of the best heavy rock albums of the last couple of years was without doubt Holding On by Virginian rock quartet Freedom Hawk. Good news then that the band are due to play some rare European dates this April. Unfortunately good ol' Blighty is not on the itinerary but hey, the mainland just a short hop these days. 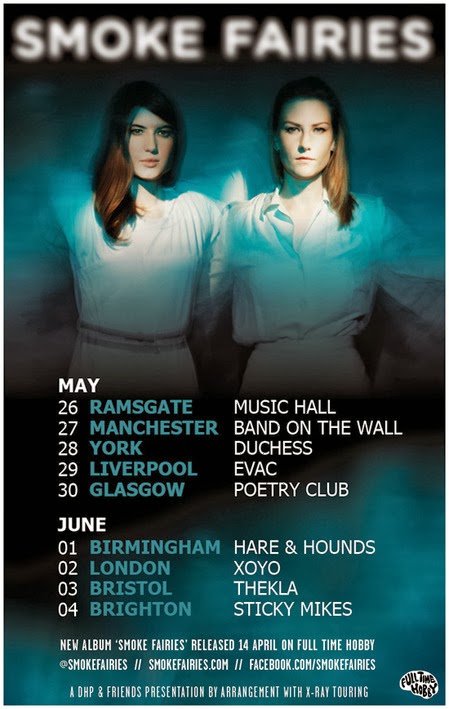 Good news for fans of ethereal bluesy folk duo Smoke Fairies. A string of live dates have been announced for May and June, along with the promise of a new eponymous album due for release on April 14th on Full Time Hobby. 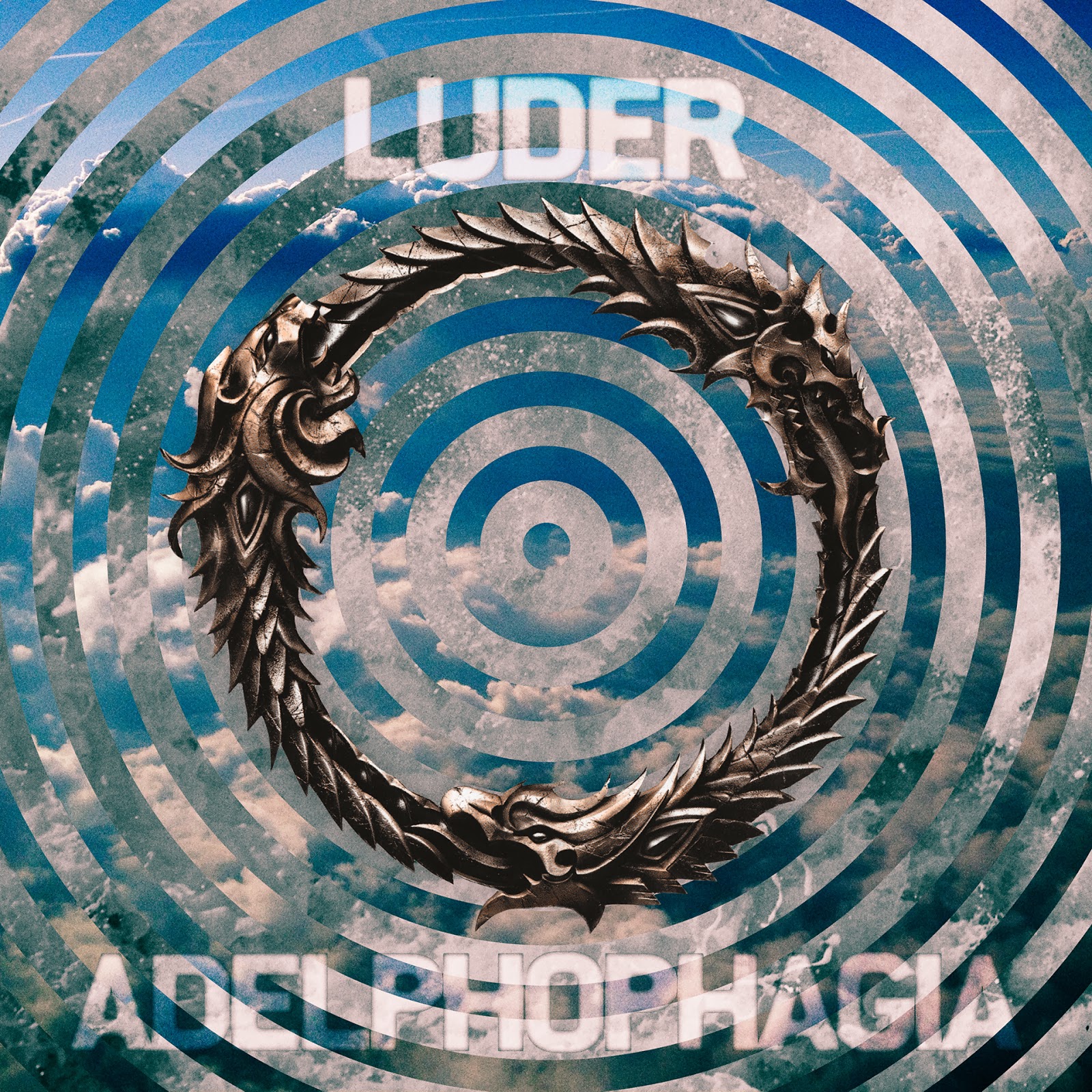 A winning mix of shoegaze and Sabbath-inspired riffage from female-fronted Detroit four piece.


If a band was to pick a Davie Bowie song to cover, most would opt for for something from his '70s or early '80s output. There are not many bands that would choose Bowie's 1997 single “I'm Afraid Of Americans”. But there again Luder (for it is they) are no ordinary band. On Adelphophagia, the band's 2nd long-player and follow up to 2009's Sonoluminescence, the band's version of the lesser-spotted-Bowie-single adds a rock guitar slant to Bowie and Eno's squelchy electro-funk. It's a choice that tells you much about Luder. They've one foot in the four-square grunge rock classicist camp, while slyly casting admiring eyes and taking note of the more avant-garde, artful and experimental. The Lady Gagas of rock if you can picture that for a second. Well maybe not, but if anyone remembers electronic rock duo Curve, that may give you an idea of what we're dealing with.

It's this mix of leftfield rock and big choruses that gives the album it's strength. It's moody, but big on groove. The album's release on Small Stone Records marks something of a stylistic departure for a label that's usually associated with a more macho stoner rock sound. This branching out into more cerebral meditative territory can do no harm though. The riffs when they do come will still satisfy die-hard rock fans, they're hard hitting and perhaps all the more effective for the band's otherwise restrained use of dynamics. While difficult to pigeon-hole into one stylistic genre, as there are various strands in Luder's musical DNA, it's this effortless blending that ultimately stands in the band's favour, and anyone willing to listen will no doubt be won over. Oh and the album title? It's what happens when an embryo consumes another in utero. So now you know! 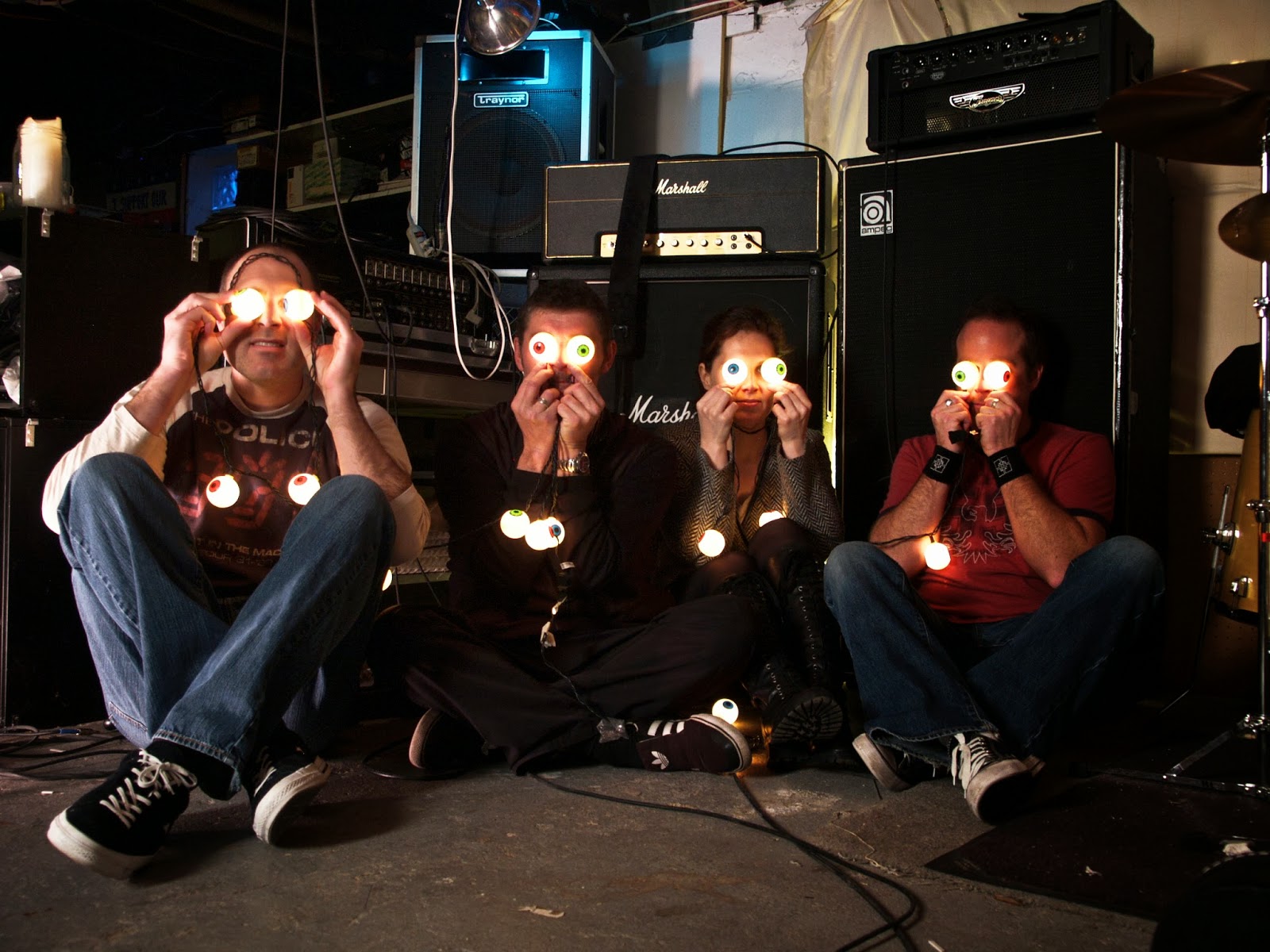 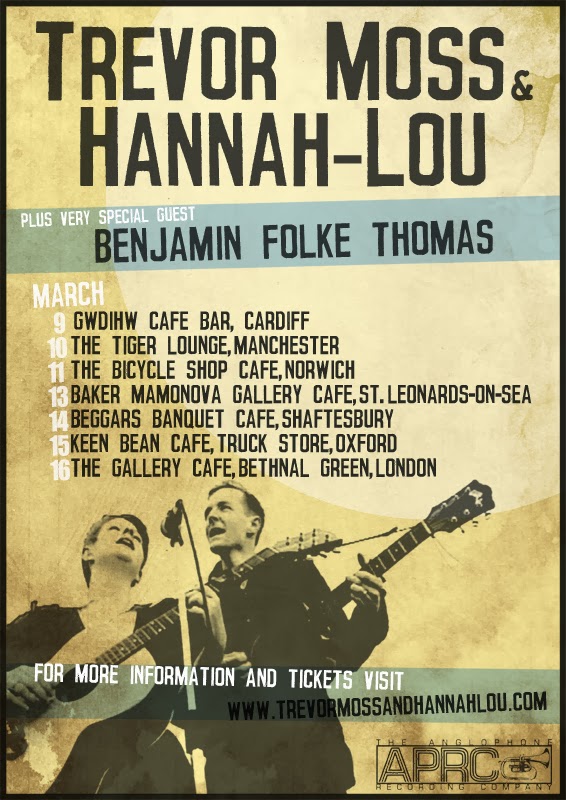 Next month sees two our our favourite acts, Trevor Moss & Hannah-Lou, and Benjamin Folke Thomas, take to the road for a small tour of cafes and coffee shops (see dates above). So as well as having your mind and soul replenished by some inspired folk-based songwriting and musicianship, the body can also benefit from a cup and a slice. Nice!

For a chance to grab a couple of free tickets along with Trevor and Hannah's three LP releases to date, head over to their website - www.trevormossandhannahlou.com 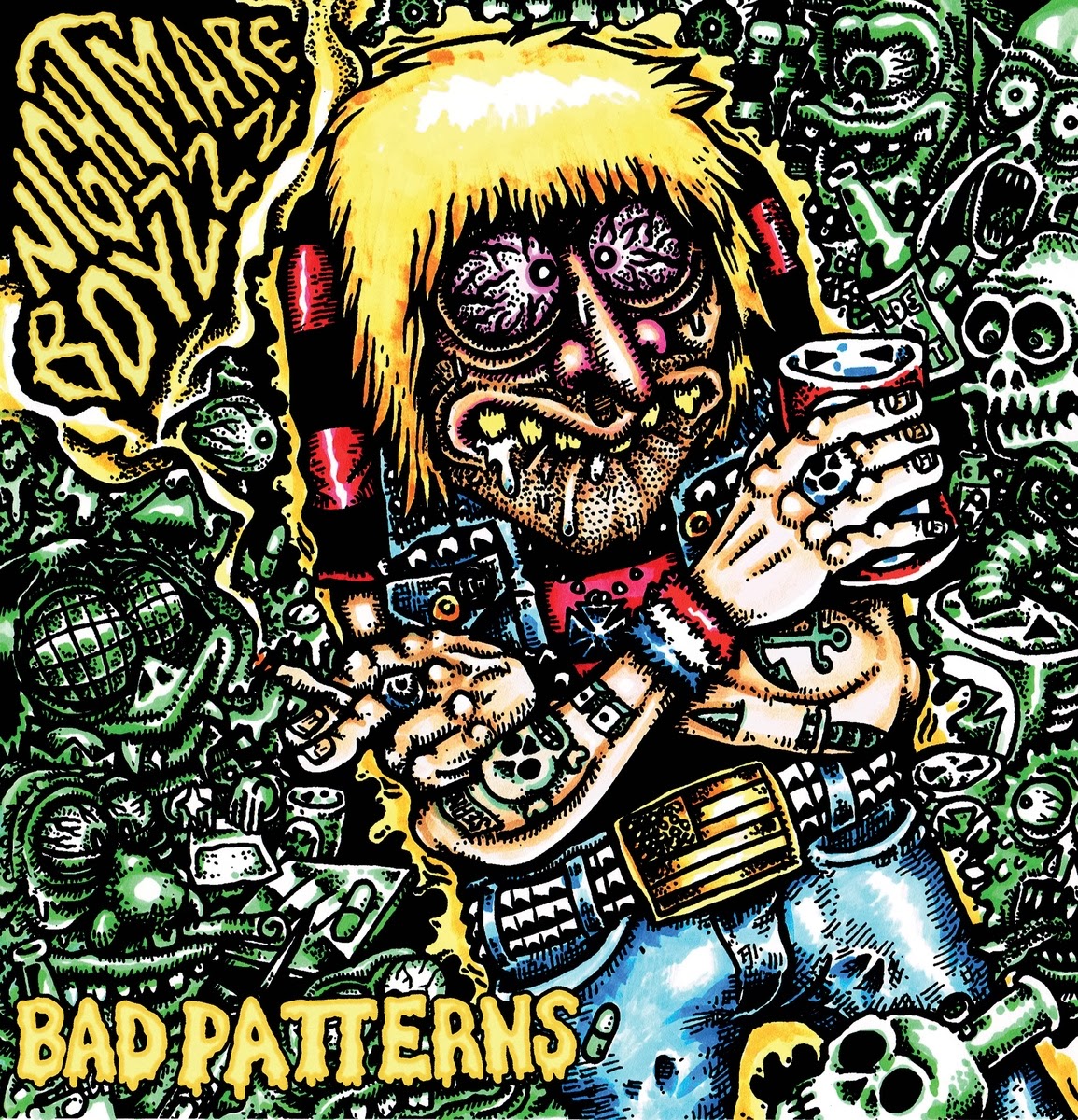 Booze-sodden new punk anthems for fans of The Ramones, The Boys, The Briefs Buzzcocks, The Exploding Hearts and all that '77 style punk.

Fans of '77 style punk-pop will be frothing at the mouth over the latest release on the legendary Slovenly label. Bad Patterns sees the Nightmare Boyzzz from Huntsville, Alabama unleash 11 tracks of self-loathing, booze-sodden anthems for dispossessed romantics everywhere.

With nifty I, IV, V chord permutations (and some relative minors for the middle eights), more hooks than a chain of haberdashers, and lead guitar lines worthy of The Damned's Captain Sensible. (Or should that be Jimmy Page on cheap speed and snakebite?)

There's some shades and nuances to keep any non-purists happy; You're A Star tips a hat to punk's glam roots, while My Body Breaks Down may just be the best new powerpop tune you're likely to hear all year. Puke My Life Up reworks the Velvet Underground's Sweet Jane Riff into the ultimate slacker-punk manifesto.

Available now on CD or LP, the album comes complete with gloriously gonzoid cover art by none other than Pork Magazine's Sean Äaberg. Check out selected tracks on the the band's widget type thingy below. 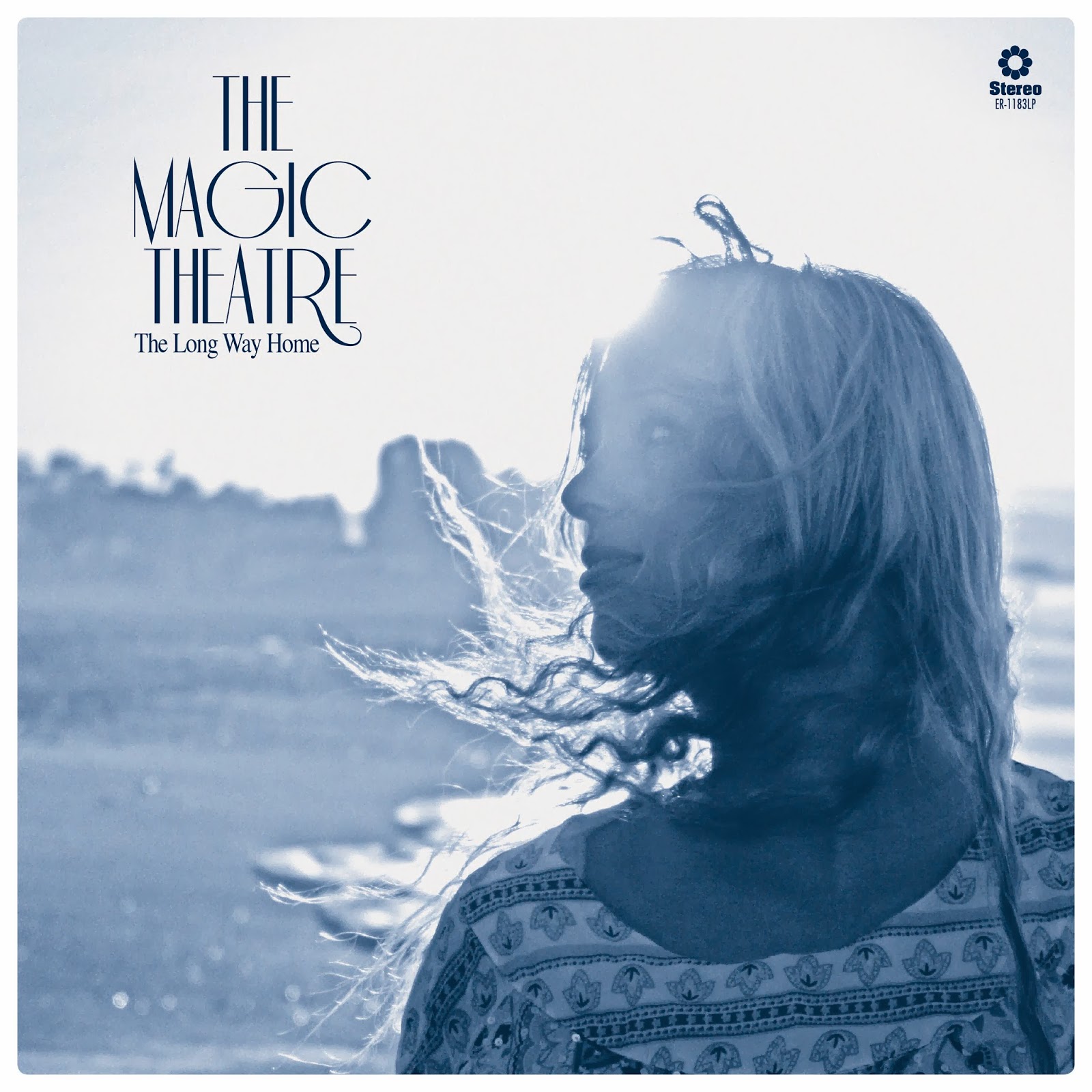 
It's easy in the modern world to feel jaded and world weary. Despite the technological advances we've experienced in the last few years, advances that our ancestors would never have believed possible, we still bemoan slow wi-fi, the intrusiveness of social media, and having to wait over 24 hours for the delivery of our online shopping. Which is why this album by Liverpool's The Magic Theatre is so refreshing and does much to re-install a much needed sense of wonder in the modern maze.

Take the album's opening track 'The Sampler', not as you might think a homage to a piece of kit by Korg, but a song sung from the perspective of a young Victorian girl, 200 years ago, busy embroidering her needlework in time for her birthday. A timely reminder that once people put their heart and soul into a craft rather than constantly updating their Facebook status.

The pleasant surprises don't end there. 'It Was Glorious' looks back at the initial rush of new young love in the height of summer. Passionate and alive, and full of warm sentiments. Glorious indeed! 'Festival Of Fire' throws in some Bollywood touches, which along with the samba percussion on 'I Got The Answer' indicates a tasteful musicality not often found in the indie pop world.

The album's centrepiece 'Cathedrals Of The Mind' takes a wry look at human achievement in science, art, music and architecture. As is said in the song - ”with bi-polar grandiosity....what high achieving deadly apes are we”, it's both a celebration and an acknowledgement of our status as a dying species. On top of that it may just be the greatest list song since The Beloved's 'Hello'. Yes that good!

The album's sole cover is a delightful version of 'Love Is Blue', Luxembourg's entry in the 1967 Eurovision Song Contest. Underpinned by harpsichord and lush orchestration. It's an indication of The Magic Theatre's inspirations, baroque '60s pop, sensual and sophisticated ballads, and lushly sympathetic orchestration.

Song after song there's a compounding sense wholesomeness and heartfelt goodness that would come across as twee in lesser hands, but here is as refreshing as a mountain spring. An album unlike any other you'll hear this year. And one which might just make you see the world afresh. 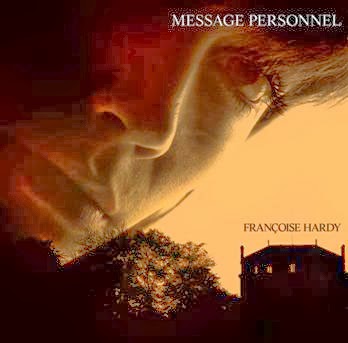 40 years since it's original release Françoise Hardy's 1973 album Message Personnel is set for a deluxe 2CD reissue. Here at Harmonic Distortion we've always had a soft spot for French pop, especially when it's as sophisticated and sensual as that by the legendary Françoise Hardy. So it's great to hear that this cult classic is getting an in depth reissue complete with the promise of unreleased extras. It hits the shops on February 17th.

Paris, 1973: Iconic French figure in music, fashion and style Francoise Hardy is going through changes. Not only is she expecting her first child, she has changed labels to WEA, and is in search of new musicians, songwriters and inspiration for her next record. One name quickly comes to mind: Michel Berger, the legendary French producer, singer and songwriter.  Françoise Hardy & Michel Berger’s collaboration resulted in Message Personnel, a cult album and instant classic in French music history.


Now reissued to coincide with both her 70th birthday and 40 years since its original release, this new set contains the original album, remastered for the very first time, plus a second CD including the 45 rpm 12’’ vinyl mix of ‘Je Suis Moi’, English and German versions of cult tracks, instrumental versions and various radio and television performances. Also included is a twenty-page booklet, with exclusive artwork, a Françoise Hardy interview and rare photos and lyrics.

The New Alchemy - On The Other Side Of Light 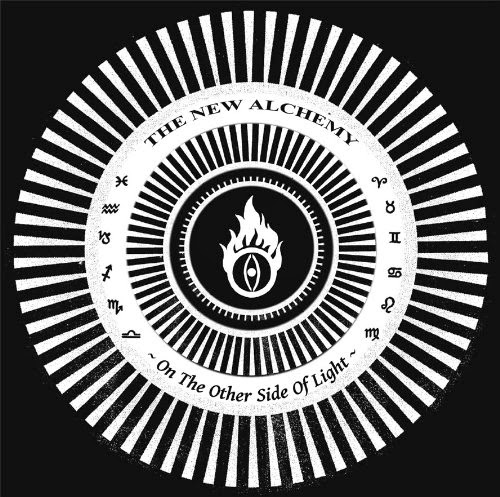 
Ebbot Lundberg will be best known to most of us as the lead singer of almost famous band The Soundtrack Of Our Lives. While they didn't fit neatly into the Britpop led guitar revival, not gaining as much press coverage as they deserved, for those in the know they were a bright beacon of hope, releasing inventive yet catchy, intelligent indie rock. Noel Gallagher was a fan, taking the band on tour with Oasis and even copping ideas and arrangements from them for his own ends. Lyla anyone? (A fact strangely predicted on TSOOL's song 21st Century Rip Off on their 2001 album Behind The Music perhaps?)

Lundberg's latest project sees him re-unite with his old pal and collaborator, sound artist Per Svensson. The pair met in the '80s at the Radium 226.05, Gothenburg's multi-media art space. It's a shared sense of exploration and “making new” that permeates all five tracks of the pair's first musical release On The Other Side Of The Light. Although the album has many classic musical touchstones (The Doors, The Velvet Underground, Funkadelic, The Stooges, John Coltrane), it's unlike any other record you're likely to hear this year. Backward phasing, squalling reedy free-jazz sax lines, spoken word, distortion, and dirge-like chord progressions. It feels as if psychedelic rock has re-ignited its revolutionary spark, connected with a long lost progressive bent.

Opening track Solar Eclipse is the most free-form offering. A beat-less, rhythm-less cut up let's you know that this is going to be a ride not for the faint-hearted. Afterwards things become slightly more trad, though no less impressive. The album closes with the Extra Terrestrial Blues. At 24 minutes in length it may test the average music fan's patience but those that stick it out will be rewarded with lyrics of stones, sunrise, rituals and ceremonies. Dark lost magick complete with poetry, drone and free jazz sax and organ. In between the relatively light title track channels a Nordic, pagan version of Pink Floyd, slowly lurching forward towards in search of some long lost arcane knowledge.

Factor in the album cover's black and white mandala, festooned with flaming eye, runes and hieroglyphics, and the photo of Lundberg and Svensson posing with standing stones on the back cover, and a one sitting headphone listen in a dark room will take you to places in your mind you didn't know existed.

Email ThisBlogThis!Share to TwitterShare to FacebookShare to Pinterest
Labels: Ebbot Lundberg, Per Svensson, Subliminal Sounds, The New Alchemy, The Other Side Of Light
Newer Posts Older Posts Home
Subscribe to: Posts (Atom)