The Bloodhounds - Let Loose! (OUT NOW!) 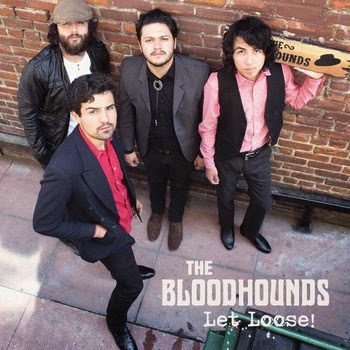 One for the greasers! Skiffle, beat, dirty rock 'n' roll, & hubcap blues feature on the debut LP by LA's Bloodhounds.

An groovy album that may came out towards the end of last year was Let Loose by LA's rock 'n' skifflers The Bloodhounds. With a nose for stripped-back bluesy rock 'n' roll, honed while busking on the sidewalks of downtown LA, the band have been helped in the studio by producer Arthur Alexander (The Poppees, Sorrows). The resulting album captures that street energy and adds some extra sonic punch.

Anyone lucky enough to have witnessed their impromptu busking gigs must surely have had a real treat. You can imagine this band whipping up a storm, on one hand they're a high octane jug band, on the other a punked up blues 'n' beat outfit. The music is a stripped-back, energetic romp, fuelled by spirit and enthusiasm more than technical ability, and all the better for that.

As well as the classic two guitars, bass and drums set up, The Bloodhounds make the most of cheap instruments and household objects. Washboards, banjos and kazoos sit happily in the mix. With a sound roooted in '60s rhythm and blues there's also a hint of punk. The overall effect is akin to Joey Ramone fronting The Pretty Things.

The band are something of an anomaly in today's pro-tools era, and go against the grain of modern polished pop, but those of us in search of the true spirit of rock 'n' roll will dig it!