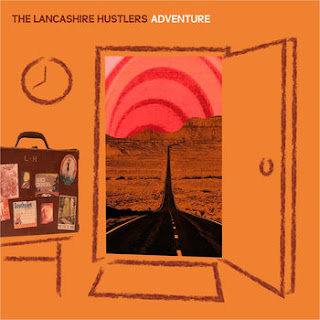 Brent Thorley and Ian Pakes return with the final part in their trilogy of pop operas.

The previous LP from The Lancashire Hustlers, 2015's What Made Him Run, was a distinctly British concept album of sorts which focused on the corrupting nature of ambition and rampant capitalism. This time round the London-based duo turn their eyes outwards towards the wider world with a globe and time-straddling travelogue. Whereas What Made Him Run had a small screen kitchen-sink feel, Adventure has a broader cinematic quality to it. A kaleidoscopic musical journey, its juxtaposition of styles and textures acts as a soundtrack to an as yet un-made movie, taking in soul, psych, rock, country and more, all held together via the pairs' pleasing vocal harmonies, and a loosely themed narrative.
The are songs about the Titanic ('White Star Liner'), the points where science and politics meet ('An Expert Dies'), camper-van road trips ('Desert Drive') and plenty more besides. This concept of travel and pioneering permeates all the songs not only lyrically but musically too. A rich expensive tapestry of sound woven by an exotic range of instruments. Indian tamboura, autoharp, African Kalimba, lap-steel guitar and Metallophone all make an appearance. (Yes I had to Google the last one too!)
As this is the third and final album in their trilogy of “pop operas” it's unclear what The Lancashire Hustlers plan to do next. One can only hope they'll continue working together. Time will tell but in the meantime, feast your ears on their releases so far. 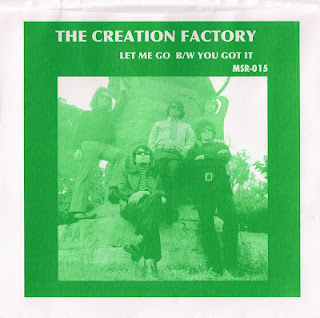 In a week where, on both sides of the Atlantic, the political shit heads towards its proverbial fan, it's reassuring to know that America still makes great music. And it's similarly reassuring that a small record label on our side of the pond is willing and able to press this music onto black vinyl. The Creation Factory are the latest Los Angeles band to have the kudos of a 7” release on Market Square Records, the small but perfectly formed bespoke label based in West Sussex.

The band's sound harks back to an earlier period in the city's musical history, a time when fuzzy guitars, reedy organ, three chords and a whole lotta snotty attitude was the order of the day. The A-side is pure riot on Sunset Strip, the sound of US teens' take on Them & The Rolling Stones. (Who were themselves imitating US blues musicians! Hell what's the point in nativism and shoring up borders when internationalism sounds this good!) Shot through with that garage-punk vibe we all dig, the track culminates in a band freak-out complete with wailing police sirens. Get diggin' it!

The flip-side is an altogether different beast. A dancefloor instrumental containing funky drummer beats, organ and guitar solos. A surefire smash down your local garage club-night. Don't leave it too late to bag a copy of this 7”, it's limited to 300 copies only and I'm not having you coming round here a-cryin' on my shoulder if you miss out! 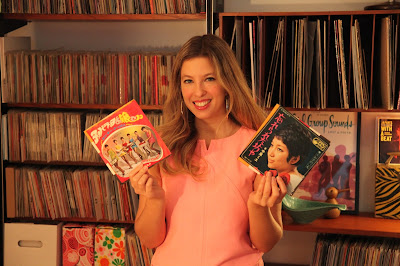 (This feature originally appeared in issue #57 of Shindig! Magazine. To read the full interview click over the jump.)

One point missed by many commentators on Prince's recent death was how much he championed female singers and musicians. A point not missed by DJ Sheila Burgel who dedicated part of her Sophisticated Boom Boom show on WFMU to highlight some of Prince's lesser known girl-pop moments. It was an affecting and insightful tribute, put together by someone who knows a thing or two about female-fronted music.

“When I first heard British singer Maxine Darren’s “How Can I Hide It From My Heart?” off the first Here Come the Girls compilation in 1995,” says Sheila explaining her eureka moment. “That shrill vocal! Those melodies! That bizarre arrangement! It completely floored me. Soon after the gates to girl-pop heaven opened, Francoise Hardy, France Gall, Sandie Shaw, the Cookies, Billie Davis, Twinkle, the Exciters, Dorothy Berry poured in….and my life was forever changed.”

Sophisticated Boom Boom features an eclectic mix of predominately female-fronted sounds and airs on WFMU out of New Jersey each Friday afternoon. When asked for a mission statement for the show Sheila says it's “restoring gender equality with the toughest, dreamiest, sweetest, sassiest, most infectious, hook-filled, girl-fronted pop from yesterday and today, and from all over the world!” Don't be surprised to hear '60s beat, yé-yé , Brill Building sounds and Japanese Pinky records alongside shoegaze, metal and gritty R&B. “Melody. Hooks. Magic,” says Burgel explaining what holds it all together, ”which is why I can love the Shangri Las, Alan Parsons Project, Janelle Monae, Megadeth, Lou Christie, Big Maybelle, Madonna, Fleetwood Mac, the Orlons, Slowdive, and so many more. It’s what they all have in common.”

WFMU is a beacon of music-led FM broadcasting, whose ad-free stance
has gained the station a worldwide audience. Its commitment to specialist knowledge and passion also gives its presenters the chance to share their vision with that audience. “With Sophisticated Boom Boom and all that I do, I am showing that female-fronted pop music is as valid, worthy, important, and enjoyable as many of the (mainly male) acts that are so fawned over by the rock establishment. Long ago, the rock critics somehow decided that Led Zeppelin are extremely important and worthy of our respect and that the Shangri Las are not, and I have a problem with that judgement.”

Aside from the radio show Sheila can be found DJing every third Friday at Our Wicked Lady Club in Brooklyn. Europeans will also get a chance to hear her club selections as she undertakes a two-week European DJ tour in August with dates in Helsinki, Copenhagen, London, Paris, and Montenegro.

Having put together the Nippon Girls and Love Hit Me compilations on Ace Records, Sheila's quest to bring us the best in rare records shows no sign of letting up. “I just took on an enormous compilation project producing four volumes of '60s girl-pop. The access I get to photos, master tapes, and recording information is just unbelievable. And I get to select and sequence the tracks, write the liner notes, and art direct, so it’s a dream job, really.”

For more on Sheila Burgel visit www.chachacharming.com
Read more »
at 18:15 No comments: 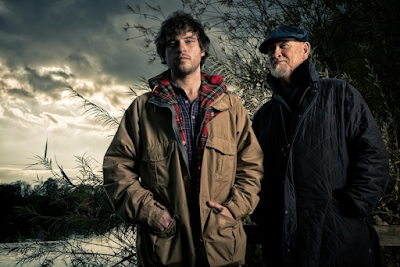 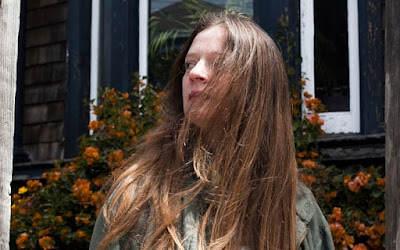 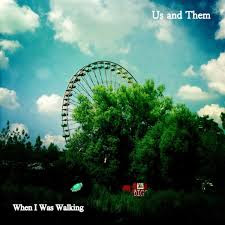 Hot on the heels of their recent Sandy Denny tribute EP on Fruits de Mer, Us and Them release this brand new 7” on the equally fab label Mega Dodo Records. This time round they've featured two of their own songs – 'When I Was Walking' and 'Green Couch'. The Swedish duo don't disappoint. Soft, beautiful and timeless. Two tracks that could melt the iciest of hearts. As the world heads into the unknowable and unpredictable future it's comforting to have such stellar music. Check out the video for 'When I Was Walking' and lose yourself in its beguiling power.

It's a very limited release so if you want to get a copy don't hang about! Available as a limited edition of 150 green vinyl copies for Mega Dodo Singles Club members with another 150 copies on black vinyl for everyone else.

TRACKLISTING
When I Was Walking
Green Couch

Email ThisBlogThis!Share to TwitterShare to FacebookShare to Pinterest
Labels: acid-folk, Folk, folk-rock, Green Couch, Mega Dodo Records, Us And Them, When I Was Walking

The Orange Drop - Stoned In Love 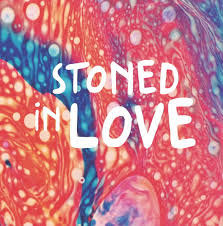 Blissed out psych-rock from Philadelphia!

It's been a busy time recently at HDHQ, which means I haven't been able to post as often as I would have liked. With Christmas, work and family commitments, a couple of bouts of man-flu my little music blog has been a little neglected of late. But with a new year comes a new start, and a firm promise to myself that I'll make more time for writing. There's so much great music around at the moment. If I can help in some small way bring it just a little more recognition then it's well worth it. Which brings me to this fine record that came out in November last year. It's been a favourite on my listening pile for the last couple of months.
Not an album that you could easily pigeonhole into a recognisable genre (but hey, ain't they often the best?!), this sonically beautiful set of songs has elements of pop, shoegaze, indie, dream-pop and acid-rock yet is not restricted by any of these labels. The album opens with 'Juniper Pearl', sadness tempered with melody and marked out by the vocals which bear an uncanny likeness to those of a young Bobby Gillespie. 'The Curse Of Kukaku' features Dave Gilmour-esque gilded guitar which takes of into the space-rock stratosphere and into the track's hypnotic coda. Tasty!
'Make It Her, Forever' begins with a portentous eastern drone. Its use of quiet/loud dynamics and guitar tremolo. 'Julia Dream' is like a lost Lennon White Album out-take, with a slightly sinister nursery rhyme vibe to it. Simple but enhanced by trippy studio effects. That's it till the end of side one but there's plenty more sonic joys to be had – the dubby beats on 'Substance B', the funky bass and fuzz guitar of 'Hey Man' and the more garage-rock stylings on 'If You Feel It'. Fans of Spiritualized, Heron Oblivion, Ultra Vivid Scene and their ilk are well advised to seek this LP out.
The band are from Philadelphia. There seems to be a happening neo-psych scene there at the moment. You should also check out Shadow Band, who have more of an acid-folk bent rather than the new psych-rock sound of The Orange Drop. But it's interesting to note both bands are mining yesterday's sounds and making something new, vibrant, and very enjoyable. Go check 'em out!

The Orange Drop are -