Suzi Chunk - Girl From The Neck Down I'm a bit of a Johnny-Come-Lately to this excellent debut album from Suzi Chunk. It was released last autumn on State Records. Around that time I heard Mark Radcliffe play one of its tracks, “No Stone Unturned”, on his BBC 6Music show which piqued my interest. With Suzi's soulful voice over that slinky, slightly psychedelic groove, it left its mark. It wasn't until later in the year that a review copy dropped through my letterbox but better late than never is what I say. Since its release the album has gone on to top Shindig! magazine writer's poll as album of the year and justifiably so.

I've always had a soft spot for Dusty Springfield's purple patch of '60s releases, that peculiar and unlikely mix of confidence and vulnerability in her voice. Girl From The Neck Down has that in spades, best evidenced on the wistful “Eyes On The Prize”. Here's an album of new songs which sound old, yet with a spirited freshness. The playing, singing and song writing are simply of a standard that goes beyond pastiche, helped in no small part to the fact the whole record comes over as heartfelt.

Click over the jump for more on Girl From The Neck Down.
Read more »
at 22:40 No comments: 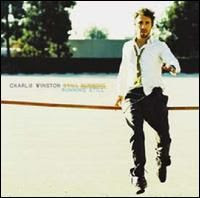 To celebrate the release of Charlie Winston's new album Running Still, Real World Records are giving away a free download of one the the album's stand out tracks. "Lift Me Gently". You can download from the Soundcloud link below or head on over to Charlie's website.

Running Still is a genre-hopping, multi-textured affair from the "Chris Martin it's OK to like". Ranging from jazz and blues, through hip-hop and folk to piano balladry, the album is already getting the big thumbs up from the folks over at Mojo and Q. Should only be a short time before the wider public catch up. Anyway, find out for yourself at the links below. 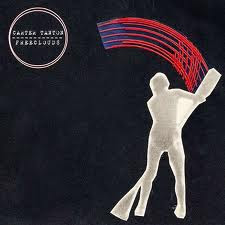 Ex-Tulsa frontman's impressive blend of indie, country and electronica. Plus that voice!

David Bowie may have retired as recent reports suggest, but even his earliest music continues to resonate with younger musicians, as is evident on Freeclouds, the debut solo album from Carter Tanton. Its title along with several of the tracks reference Wild Eyed Boy From Freecloud, Bowie's ode to loneliness and disassociation that was originally on the B-side of Space Oddity.

It's clear that Mr. Tanton is a mighty fine singer, possessing a voice that the Chris Martins of this world would give up their uniforms for. No need for histrionics or show stopping tricks, just a reliance on the beauty of its unique tone. His voice alone is reason enough to investigate this record, released on the ever reliable Western Vinyl label. Factor in the strength of the song-writing and it would be foolish not to check it out. Over the course of ten songs, Tanton displays his knack for writing tender tunes and lyrics in differing while maintaining his own high standards throughout; from anthemic indie (Murderous Joy, Horrorscope), spacey electronica (Fake Pretend) and nu-folk (Gauze Of Song, Nylon), through to wistful country (Saturday). Reflective without being maudlin, it's timing couldn't be better for anyone wanting to escape forced Christmas cheer for a little wintry introspection.

The Walkabouts - Travels In The Dustland 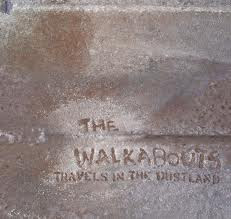 “They've all come to look for America” - Simon And Garfunkel, America, 1968

For their 15th studio album and their first since 2005's Acetylene, Seattle's Walkabouts have come up with a loosely based song cycle or concept album concerning a semi-mythical place, The Dustlands. It doesn't take a genius to work out (and by the press release's own admission) what they're really talking about is their own country, the good ol' US of A. Of course it's long been a theme of many an American artist's work to try and capture the essence of this fascinating and young country. From Woody Guthrie, Bob Dylan, Curtis Mayfield, through to Patti Smith, Bruce Springsteen and Green Day, it's an obsession that can last a whole career and still only only begin to scratch the surface. A brave band then to approach such a task as America is still suffering from a crisis of confidence 10 years after the horrors of 9/11, consolidated by the knocks it's taken from the global recession.

Click over the jump for more on The Walkabouts - Travels In The Dustland
Read more »
at 12:45 No comments:

Email ThisBlogThis!Share to TwitterShare to FacebookShare to Pinterest
Labels: Glitterhouse Records, The Walkabouts, Travels In The Dustland

The Cubical - It Ain't Human 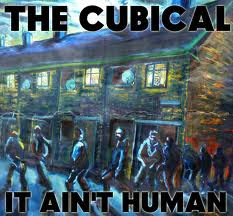 Don't be a square! Check out the 2nd album of raw but literate swamp-psych blues from these fast-rising Liverpudlians.

Like most Liverpool music folk, the Cubical share a fascination for the work of one Don Van Vliet AKA Captain Beefheart. (Don't ask me why that should be, perhaps Trout Mask Replica or Doc At The Radar Station is on the school curriculum over in Merseyside.) One thing's for sure, vocalist Dan Wilson has certainly studied at the Beefheart & Howlin' Wolf Academy of Blues Growling. And graduated with honours. It matters not whether this is an affectation, after all such stylised singing was probably an affectation for for Beef and Wolf too. What matters is how it's used and whether you have something to say, which fortunately for us, Wilson does, covering wide range of emotions and topics. From the blurred boundaries of friendship and romantic love on Are We Just Lovers, to advancements in mechanical engineering on Three Drop Jameson Mechanism. (No, I don't know what it is either.) There's also room for some classic European literature references on An Ode To Franz Biberkopf.

Click over the jump for more on The Cubical - It Ain't Human
Read more »
at 12:39 No comments:

Email ThisBlogThis!Share to TwitterShare to FacebookShare to Pinterest
Labels: Halfpenny Records, It Ain't Human, The Cubical 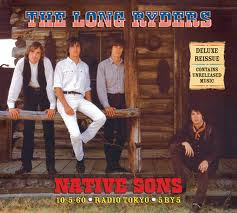 In the mid-80's, long before alt-country went overground, few people carried the flag for old-school country rock. In the decade that saw the rise of hi-tech, The Long Ryders were one of the few bands that saw worth in the past, playing music that owed more to Gram Parsons, Buffalo Springfield, British 60's Beat, The Byrds and Hank Williams than it did to the stylings of the day. That said there was a definite driving punk edge to their wares, largely due to anglophile band member Sid Griffin. (Sid later became a much loved UK-based music journalist, and leader of his new band The Coal Porters).

“Native Sons” was their debut album and now gets the deluxe reissue treatment with extra tracks and alternative versions. Massively influential to a broad range of younger musicians who were starved of something authentic and not smothered with artifice. This album was very much the roots of the alt-country and Americana that would become cool and omnipresent a decade later.

The songs and production have stood the test of time well, veering from fast upbeat rock and roll, through country laments, to jangly garage pop. Original Byrd Gene Clark even makes an appearance, singing the lead vocal on “Ivory Tower”.

If you're going to buy this album, I'd suggest opting for the CD rather than the download, purely for the illuminating sleeve notes and photos. Proof that there's still life left in the CD format if the packaging is well thought out. 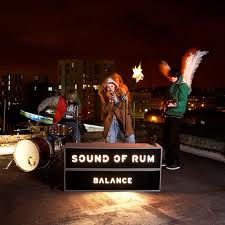 UK rap has come a long way in the last 20 years. In the late 80's it seemed we were only capable of stylistically copying our US cousins, whereas now UK rap would appear to have the upper hand, steadfastly refusing to go down the gangsta bling dead-end that neuters a lot of rap coming out of America at the moment. The success of the likes of Plan B, Dizzy Rascal et al proves that these days we're actually pretty good at it.

Enter Sound Of Rum with their ambitious, intelligent, and hugely entertaining brand of British hip-hop. Fronted by rapper Kate Tempest, who thankfully steers clear of the kind of braggadocio that is the downfall of many of her male counterparts. Instead she favours social observation with compassionate world-view, along with a love of classic literature and Greek mythology. (Track titles include “Icarus” and “Prometheus”.) She's definitely someone with something to say and a unique way of saying it.

The music is pretty neat too; the band's playing faultless throughout and anything but formulaic. Ranging in style from laid-back and jazzy, through break-beat drum and bass grooves, to experimental guitars. Their sound coming together in the crucible of London's squat party scene. They have a sound all of their own, worth checking out. 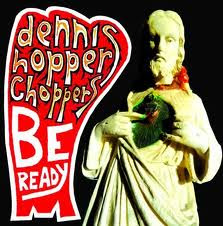 The songs for this album came together from a writing session in the South of Spain, in the heartlands of where all the classic Sergio Leone spaghetti westerns were filmed. And it's the soundtracks of those movies that pervade the feel of this whole album. The scene is set from the opening track “Good To Me” with its plaintive Tijuana trumpet and strings intro. Then there's the gunshot drums and reverbed tambourine of “Girl Walked Out Of Town”.

Nicholls' voice alternates between melodramatic Scott Walker croon, and weighty Johnny Cash-style storytelling. He has a nice line in melancholia too, best displayed over the baritone guitar twang backing of “Long Trip Home”, and the choir backed “Blue”. “Razor Gang” breaks the mould and veers away into a more dramatic Nick Cave territory.

There seems to be a resurgence of interest in all things spaghetti western at the moment. The forthcoming Dangermouse project “Rome” hits the shops soon too. This album would bookend it nicely. Darkly brooding mariachi vibes seen through a prism of London savviness. 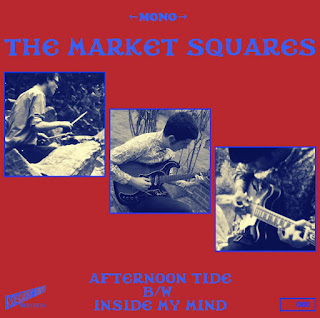 Paul Messis has been a busy chap of late. As well as his own string of solo releases, and bass-playing duties for The Higher State (see post below), he's also found time to record this debut single by ad-hoc band, The Market Squares, for his own Market Square Records imprint.

Due for release on February 4th, this limited 7" (300 copies) features Paul alongside Calvin Laporte and Evan Smith, both members of Nashville psych-poppers The Sufis. "Afternoon Tide" and its B-side "Inside My Mind" are both Messis originals and were recorded in Nashville over a weekend last August. Both tracks have a charming spontaneous feel, with UK '60s beat era melding with US garage-punk. Head over to Paul's website for more info and details of how to order, or check out the A-side below.

The Higher State - I Just Pretend 7" 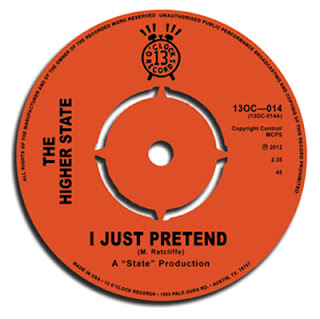 The latest single from Kent's The Higher State was released at the tail end of 2012 on 13 O'Clock Records. The A-side features a brand new original track, penned by front man Marty Ratcliffe. "I Just Pretend" is two and a half minutes of superbly authentic West Coast folk-rock. The band come across as a great, lost Elektra Records act; their sound somewhere between the 12-string jangle and harmony of The Byrds and the garage folk of Love and all those great minor hit Nuggets bands.

The B-side doesn't disappoint either with the band's take on The Gypsy Trips' Dylan-esque garage anthem "Ain't It Hard". The Gypsy Trips' version came out in 1965, but the song is perhaps better known for the altogether more snarly 1966 version by The Electric Prunes. The Higher State manage to put their own more polished, though no less enjoyable stamp on the track. All in all a great single.

Available on a limited 7", the single is in glorious mono and comes complete with a push-out centre should you want to stick it on your vinyl-playing jukebox.