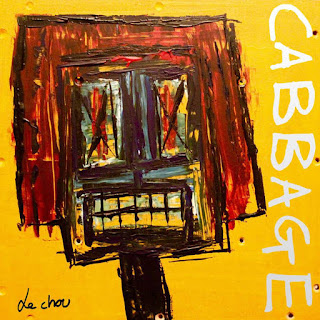 It's a brave band that names themselves Cabbage. The associations of such a word don't do you any favours but there is a perverse bravery in such an act, and if the tunes and are good what's in a name? Cabbage, a band definitely not in a vegetative state, have just released their five track debut EP via Play And Record Records. With lyrics rich in northern humour and mischief, bolstered by brash and bolshy guitar riffs, they reveal themselves as a guitar band whose mission statement is to subvert and have fun in equal measure. Their track “Tell Me Lies About Manchester” (not on the EP though live versions can be found on YouTube), tells you much about the city's love/hate relationship with its musical heritage and will make you laugh in the process.

Their skewed brand of post-punk, pre-corporate indie-rock continues a lineage that connects The Fall, Pavement, The Arctic Monkeys and even perhaps The Blue Aeroplanes. The five state-of-the-nation addresses acknowledge the absurdity of a lot of modern life, be it “Contactless Payment”, or the comfort of “White Noise” in a Tory-run country. Readers of school-attending age may want to opt out of listening to “Dinner Lady” however, a frankly disturbing tale of revenge that involves masturbation, quiche and revenge. I guess you have to listen now eh! Check out the EP via the Bandcamp link or watch the video for lead track “Kevin” below. I dares you! 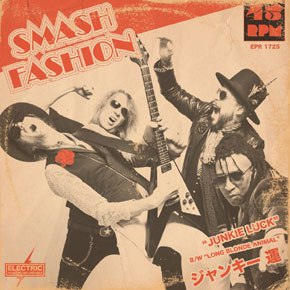 
The current cachet of junkshop glam seems to be spreading. The Italians are well represented by Giuda and Faz Waltz of course, and the UK has Ulysses, but in glam's capital city of LA where glamour and sleaze go together like Jack 'n' Coke, or er... Hugh and Divine, there's the mighty SMASH Fashion, the self-confessed dandy-rockers whose penchant for power chords is matched only by their fondness of the dressing-up box.

Their LP Big Cat Love won over a new legion of fans in 2014 and the band now follow it up with a brand new 7” on lovely bright red vinyl. 'Junkie Luck' turns the feelgood factor up to ten, and features a tale inspired by Lee Harvey Oswald Band guitarist Zowie Fenderblast. If bands with sunglasses indoors, floppy velvet hats, and Flying V guitars is your thing look no further. And this band has tunes made for both FM and AM radio. The A-side is the sonic equivalent of a Chunky Kit-Kat, big on melody and riffs and a real sugar boost! The flip shows the band's roots via an equally enjoyable stab at Golden Earring's Long Blond Animal'. As welcome as a backstage pass! Let's party!