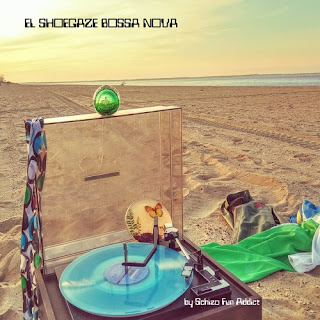 The clue is in the title with this one. The meeting of shoegaze textures, indiepop melodies and Brazilian Bossa rhythms make up this latest long-player from New Jersey's Schizo Fun Addict. The band have been around since 2000 and are centred around the musical partnership of Jet Wintzer and Jayne Gabriel. For this record they're joined by guitarist Rex John Shelverton (Bellavista, VUE, Portraits Of Past) and new drummer Daniel Boivin (Asa Ranson, Death Of Fashion).

Musically this album occupies a place quite unlike any other. It is in turn sexy, moody, melancholic, dreamy, sad, cinematic and slowly charms rather than demands your attention. A touch of mariachi brass here and there along with plaintive piano adds to the vaguely spaghetti western feel while the clever use of analogue keyboards and layered guitars makes any attempt at genre-placing futile. Put simply this is mood music – transformative and moving. Best heard on a rainy Sunday morning while contemplating life's regrets and hopes. Deep themes demand deep emotionally resonant music. Here is some.

El Shoegaze Bossa Nova is available digitally now from all the usual outlets. There is also a limited audiophile vinyl release via Sugarbush Records. 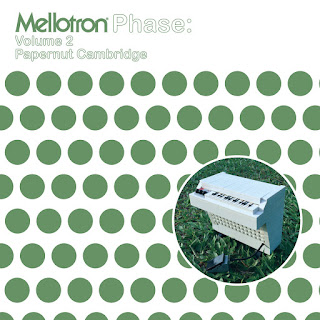 It's impossible not to love Papernut Cambridge. Already this year they've released the fantastic album Outstairs Instairs, and now this, a follow-up to 2017's Mellotron Phase: Volume 1. For anyone unfamiliar with those two albums here's the crack – Outstairs Instairs is a song-based album rich in sentiment, intelligence and lyrical ideas and allows the collective's many talented musicians to shine. Mellotron Phase: Volume 1 is a 10” vinyl LP featuring library-music inspired instrumental pieces with sounds sourced from original Mellotron tapes. At times the music is funny, sad, moving, intriguing, cheesy, evocative, wry, uplifting and much more. And now we have a volume 2!

Released by head-Papernut Ian Button's Gare Du Nord label in conjunction with boutique library music company Ravenwood, this album is as authentic as it gets. As stated on the sleeve - “Apart from the drums, bass guitar and some light percussion all the instrument sounds you hear on this record were made originally by a Mellotron or one of its contemporary tape/disc-based playback instruments. The sounds were picked from Gforce's M-Tron Pro tape libraries... Throughout, the original unedited mono patches were used to preserve the tone and functionality of the original instruments.”

Library music remains as highly prized among collectors as ever and continues to inspire today's musicians. It's not difficult to see why. It allows them to step outside of traditional band-based collaborations and draw upon a different set of influences – foreign pop and folk, soundtracks, new age music,TV themes, light entertainment orchestras, military bands. Literally anything goes. The track titles on Mellotron Phase: Volume 2 are evocative in themselves – for example 'Cha-Cha-Charlie', 'Cygnus Probe', 'Boss Club' and 'Sergeant Major Mushrooms'. My own personal favourite being 'A Cowboy In Montmartre'. Each piece is its own mini film score delivered with wit, verve and a whole lot of musical ability. For all the melodic and stylistic variation, the sonic restrictions lend the album a continuity of sound which holds the whole thing together in a most delightful and satisfying way.

Like its predecessor Volume 2 is released on 10” vinyl. There is also a CD version which collates both volumes. Buy with confidence, you will love this record.


It can't have escaped your notice that The Beatles are on sale again. This time to mark the 50th anniversary of the White Album. Originally released in 1968, a year after the dazzling summer-of-love opus Sgt. Pepper's Lonely Hearts Club Band, and a year before they opted to “get back” to their roots by playing a stripped-down adaptation of rock and roll. Now I love the Beatles as much as I ever did but I've long since concluded that Paul McCartney has had quite enough of my cash over the years and I'm not shelling out a chunk of my wages on the boxed set of the White Album, as good as it may be. I'm sure the 102 takes of 'Sexy Sadie' are illuminating in their own way but I won't be investigating further.

A much better way to celebrate the flowering of late '60s counter-cultural pop is via this latest compilation from Fruits de Mer Records. A triple vinyl set featuring the cream of today's psychedelically inclined grass-roots artists covering their favourite tracks from the late '60s. The set is titled The Three Seasons in reference to the the years 1966, 1967 and 1968. It's from these three momentous years that all the tracks are taken. There are big names covered (The Rolling Stones, Jimi Hendrix Experience, Small Faces, Love and even Neil Diamond), along with the ever fascinating foot-notes from the era (Touch, Family, Made In Sheffield, Don Shinn and more).

There is so much great stuff here it's difficult to know where to begin. Take a look at the tracklisting below to get an idea of what makes this such an amazing collection. I won't go through every track but they're all worth hearing. Standouts for me include The Locker Room Cowboys excellent take on The Stones' 'We Love You', The Past Tense's version of 'Magic In The Air' (originally by The Attack) and Jay Tausig's take of folk standard 'Let No Man Steal Your Thyme' (included here having been covered by Pentangle in 1968).

Suffice to say this is probably the best compilation I've heard all year, I can't recommend it highly enough. Oh and it also features three '60s legends in The Pretty Things, The Electric Prunes and The Yardbirds. So if fiftieth anniversaries are your thing avoid that White Album deluxe box set and opt for this fabulous collection instead. You will not regret it.


Click here for Fruits de Mer Records.
at 09:35 No comments: