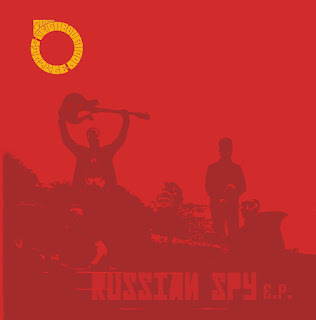 The Salisbury psych-rockers are back with a single about recent hometown events.

Without wishing to make light of the seriousness of dosing someone with Novichok, at the two minute forty seconds into 'Russian Spy' there's a discordant guitar break which attempts to render in musical form the disorientating effects of the life-threatening nerve-agent. Undoubtedly safer than imbibing, it highlights The Neighbourhood Strange's growing confidence, as well as signalling the healthy state of modern psychedelic rock. With a melody that draws from eastern European folk and a brash swagger that's distinctly a “British-dudes-with-guitars” thing, 'Russian Spy' is modern musical reportage at its finest, from a band uniquely placed to commentate on such matters.

On the flipside of the vinyl is 'Many Secrets', an equally enjoyable if more trad Brit-pop affair; guitar-driven but with a big chorus. Vocalist Marcus Turner turns in a performance that's both melodic and punkish, while the band sound like they've mastered the art of ensemble playing, countless gigs having helped gel and hone their collective sound.

If the two tracks on the vinyl single aren't enough the CD version contains both 'Russian Spy' and 'Many Secrets' along with an extra three tracks. 'Mary Mary' has a neat quiet/loud dynamic and errs towards the band's West-Coast garage rock side. 'Walk On Water' has a languid, rolling feel, with plenty of space for organ runs and swells. 'Desert Sand' bookends nicely with 'Russian Spy', it's a short instrumental interspersed with occasional vocal shouts and encouragements. It too has a melodic feel that comes from somewhere between Eastern Europe and the Silk Road. Packed with plenty of surfy guitar, kind of like Dick Dale meets the Arabian Knights.

If you want to catch the band playing live, they have a hometown gig at the Market Square, Salisbury on August 23rd. Or if you can't make it check out this rather fine disc instead. 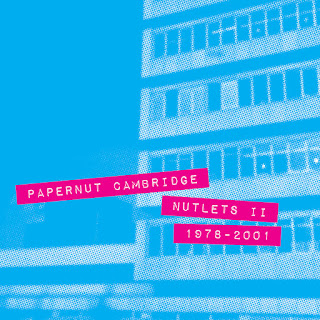 If there's such a thing a a regular reader of this humble blog, they'll be aware that Papernut Cambridge are a big favourite round at our house. And a productive lot they are too. Take their self-penned albums which brim over with warmth and intelligence, or the library music inspired instrumental albums, Mellotron Phase Volumes I & II. There's enough discs there to keep you happy should you ever find yourself on a on a desert island with said records and a record player. If that's not enough for you, you are obviously too fussy and demanding, but fear not, there's always Nutlets 1967-80 which they released in 2015. It's an album of cover versions giving an insight to the band's roots and musical loves. Featuring big melodic hits from the tail-end of the '60s to the beginning of the Thatcher years, it remains a celebration of pop's age of innocence that's sure to please even the most jaded sets of ears.

The good news is they're set to release a follow-up this week. Nutlets II 1978-2001 takes up roughly where Volume I left off. Beginning in the post-punk era what binds all the choices together is not genre but a certain subversive spirit, music that's slightly left-of-centre, says something lyrically, but still adheres to the notion that pop should be fun, and should at very least move you emotionally or physically. Or preferably both.

A lot of the songs you'll be aware of, some perhaps you won't. Some may be your own personal favourites, others may be new to you. You may be indifferent to some of the originals but hearing these covered versions in the context of this collection might give you fresh insight and have you e-evaluating your opinions. The collection draws from the well of post-punk, C86, electro, left-field guitar pop and college rock. Rather then try and re-invent the songs or give them a makeover, the band have pretty much kept to the tempos and styles of the originals, which is refreshing when you've been let down in past by one too many free CDs from Mojo magazine, and they're all imbued with Papernut's inimitable passion.

So what songs to they cover? There's the full tracklisting below but if you'd indulge me for a short while I'll break just a few of the songs down into three highly personalised sections - Really good pop, (songs that I personally know and love), re-evaluations, (stuff I glossed over first time round), and revelations (songs that are new to me).

Really good pop - Who can resist the perfect pop of 'Getting Nowhere Fast' by Girls At Our Best? Ditto Primal Scream's 'Velocity Girl', a dark song wrapped in the sunniest of melodies. Then there's Suede's 'Metal Mickey', a song that pre-dated the onslaught of Britpop and was in hindsight better than all of it. My favourite from this section is Daft Punk's 'Digital Love'. I loved this track from the very first time I heard it, it's instrumentally audacious, catchy, and really great fun.

Re-evaluations – Big Audio Dynamite's 'Medicine Show' scores big here. I kind of passed them over at the time. Something to do with the basic proto sampling, guitars without headstocks, and long coats. I admit now I was wrong and always enjoy hearing them on the radio, all the more so after having heard Papaernut Cambridge cover them here with such brio. Similarly the cover of New Order's 'Bizarre Love Triangle' has sparked a renewed interest in the Mancunian synth-pop band.

Revelations – Topping the list in this section is 'Boil In The Bag Man', a superb song originally by Adam and The Ants, which takes a swipe at the-man-on-the-street. This and covers of songs by Josef K, Psychedelic Furs, ESG and The Only Ones means this album is, for me, as rich in discovery as it is in discs of a more desert island nature. Everything this band has released is highly recommended and this set of covers is no exception. Dive in!

Available on 2LP vinyl or CD.

Grifter Kid and the Midnight Raiders – The Receipts of Time 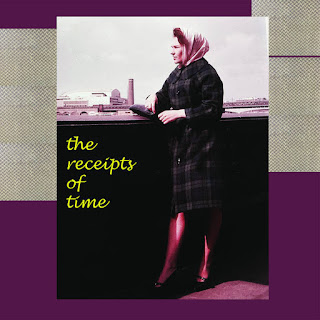 Many a fine band has fallen through the cracks of critical acclaim and failed to generate press coverage due to the eclectic nature of their music. It would be a shame if that happened to Grifter Kid and the Midnight Raiders. Music journalists, (myself included), are very often guilty of using pigeon-holes, genres and comparisons when trying to get across a sense of what a band or artist sounds like. And while there are comparisons to be made and genres to mention in describing Grifter Kid's latest long-player, its restless stylistic shape-shifting is what makes it such an enjoyable record.

I admit to not having heard Grifter Kid's previous three albums but The Receipts of Time brims over with intelligent, literate songwriting that draws on both personal memories and creative imaginings. Wedded to these vignettes is a pick-and-mix attitude to styles and a wealth of inspired instrumental flourishes. The album's attempt at different styles and moods could almost be seen as an experiment and exploration of one's identity. It's bit like Mr Ben, the '70s cartoon character who could try being a cowboy for an afternoon, or a Roman centurion or spaceman, while still being able to change back into his day suit in time to make it home for his tea.

While The Receipts of Time may borrow stylistically from America's rich musical heritage – there are moments of Coltrane-esque jazz swing, gut-bucket blues, and spoken word noir – it's an British record through and through. 'Wrestling, Darts, Snooker' is a nostalgic homage to a '70s/'80s childhood, the days of only three TV channels, and the tail-end of British monoculture. Elsewhere there are Brit-centric references to fish and chips, pellet guns and shopping malls. And only a band from these isles could title a song 'Gardening In My Suit'. If all that makes you think they're resurrecting the jingo-istic ghost of Brit-pop fear not. It's something far more subtle and nuanced.

So who, what, where and why are Grifter Kid and The Midnight Raiders? Karl Theobald may be more familiar to you as an actor, with TV roles in Plebs, Skins, Green Wing and most recently Danny Boyle's new film Yesterday. With such a successful acting and comedy career it's surprising he can find time to devote to music-making but thankfully he does. As leader and main songwriter/vocalist in the band I suppose that makes him Grifter Kid (a reference to the iconic kids bike perhaps?). The Midnight Raiders comprise of Theobald's longtime friend saxophonist Nigel Woolston, double bassist/vocalist Rowan Lambourne-Gibbs, pianist Russell Marsh, and drummer Dan Hale. The album also features guest appearances from Sam Beer (guitar), Gerardo Marrone (bass) and Keiron Phelan (flute). As consummate a group of players as you're likely to find, equally at ease whether improvising over a series of ninth and thirteenth jazz chords, having a decent stab at reggae, or impersonating a piano lounge bar-band. An under-the-radar release it may be but one that sets the bar high. 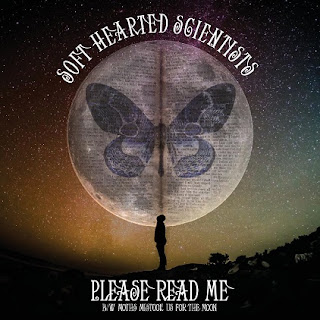 Back and on form! New coloured vinyl 7” from Cardiff's top psych-popsters!


“Happiness comes in small doses.” It's a quote that has stuck in the back of my mind since I first heard it on a televised comedy show in the 1990s, uttered by famous philosopher Denis Leary. While his comedy may have dated the sentiment holds true, happiness does indeed come in small doses and fleeting moments. Leary said it comes via a cigarette, a chocolate chip cookie or a five second orgasm. You no doubt have your own personalised list you can add to that. For me it's 7” singles, psychedelic pop with catchy melodies, and knowing that your favourite musicians continue to make happening music.

So my quota of small doses has been topped up by this forthcoming single from Soft Hearted Scientists. The band have had a bit of a break to pursue other projects, with frontman Nathan Hall remaining most noticeably active with Nathan Hall & The Sinister Locals. The return of Soft Hearted Scientists is something of a surprise but a very welcome one. For the single's A-side they've covered an early classic by The Bee Gees'. 'Please Read Me' appeared on The Bee Gees' first LP back in 1967 and is given a superb and sympathetic reading here, the band making it their own.

Soft Hearted Scientists' reputation as prolific songwriters is bolstered by the single's flipside 'Moths Mistook Us For The Moon', a gentle number with pizzicato strings and lyrics that merge nuanced psychedelic observations with ordinary and everyday experiences. It's good to have the band back.