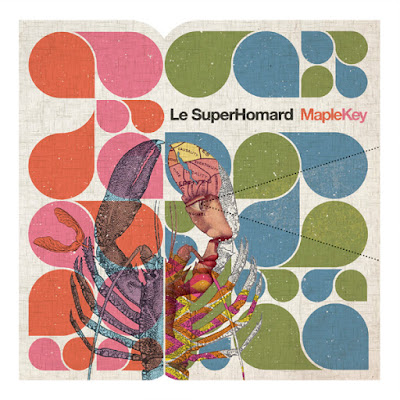 10” LP of super cool modernist lounge music! The soundtrack to the best cult movie that never got made!


Best band name of the year must surely go to France's Le SuperHomard. They take their name from a club featured in '60s French crime caper flick Let's Not Get Angry. OK, so in English, The Great Lobster might lose some of it's cool but the music the band make is as groovy and sophisticated as you'd expect.

Le SuperHomard is the brainchild of Christophe Vaillant, formerly of Pony Taylor, and started as a solo project before the addition of his brother Olivier on drums and friend Pandora Burgess who sings lead vocal on four of the tracks. Together they've swapped Pony Taylor's garage rock for a more optimistic and breezy style of electronic pop.

Musically Le SupeHomard are part retrogressive cool and part forward looking indie nonchalance; stylish, intelligent and the epitome of Gallic élan. There's a lot packed in to the album's eight tracks; from the propulsive bass and drum clatter of 'Intro' through the gentle electronic dreaminess of 'MapleKey' and lo-fi folktronica on 'Bituminized', it all fits together. Taken as a whole the album has a definite widescreen cinematic vibe and comes across as the soundtrack to the best cult movie that never got made.

MapleKey is out now in the UK on Mega Dodo Records on CD or limited edition 10” white vinyl. 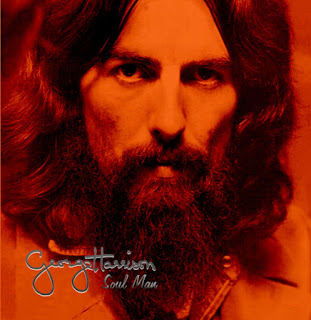 In depth look at The Quiet One's extra-curricular and post-Fabs releases!

If, like me you're a massive Beatles fan, no doubt your bookshelves already groan under the weight of books on the world's most famous scousers. You probably ask yourself how many more times can I read about those four psychedelic horsemen, what they did, and from what perspective? The answer is of course many many more times. It's a story that never gets boring. And if it does there's always the solo careers.

George Harrison Soul Man Vol. 1 is an 8 x 8 inch hardback book by Beatle expert John Blaney that examines The Quiet One's solo recorded output starting with Wonderwall in 1968 up to George Harrison in 1979. Even the most informed among us will find new facts and insights in Blaney's well-written text which gets right to the heart and soul of George's musical journey. Equally as enticing are the 400-plus images of album and single sleeves, US and UK label variations and trade-ads. What struck me most reading the book was just how music George made, or helped make, as the book also looks at his production work for other artists during the early days of Apple Records.

Harrison's post Beatles career is often unfairly overlooked or sidelined when compared to those of McCartney and Lennon (plus ça change), All Things Must Pass and Concert For Bangladesh notwithstanding, but with his back catalogue recently appearing on all the streaming sites it won't cost you a penny to listen and re-immerse yourself with his lesser known gems. Save your money instead for this lavish book which will compliment and enhance your listening. With a cast of characters that includes Billy Preston, Doris Troy, Eric Clapton, Delaney & Bonnie, as well as Hare Krishna devotees, Hell's Angels, Bob Dylan, Phil Spector and the Monty Python Team, this book is proof that while George may have described himself as an “economy class Beatle”, the truth is he was anything but. 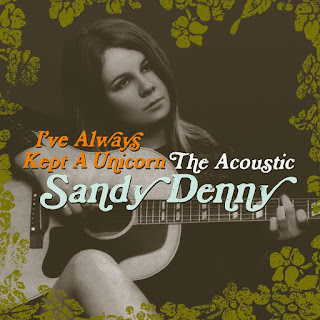 This 2CD compilation of rare acoustic Sandy Denny tracks looks pretty tasty! It's released on April 22nd and you can pre-order here. Read on for the full press release and click over the jump below for the full track listing.

I’ve Always Kept A Unicorn is the best album that the late Sandy Denny never made. This 40-track/2CD set, comprised of demos, live, radio and TV recordings, captures the sublimely gifted British singer-songwriter at her most intimate as she runs through stripped down arrangements of songs she performed with the Strawbs, Fairport Convention, Fotheringay and The Bunch, along with material from her four solo albums.

Exclusive to this masterful set are three demos recorded at Richard Branson’s Manor Studios in December 1971 for the 1972 rock and roll covers album, The Bunch Rock On; alongside Love Made A Fool Of You and Learning The Game by one of her teenage heroes, Buddy Holly, she sings a charming duet with Linda Thompson on Phil Everly’s When Will I Be Loved.

All those who knew Sandy Denny well, and who worked closely with her, recall how brilliant she was as a solo acoustic performer and many welcome this compilation as fitting homage to her unique and true talent.

“Sandy was, as are our most brilliant performers, much better solo; I so wish she had recorded a solo album, and told her so.”  (Linda Thompson)


Click over the jump for the full track listing.
Read more »
at 21:48 No comments: 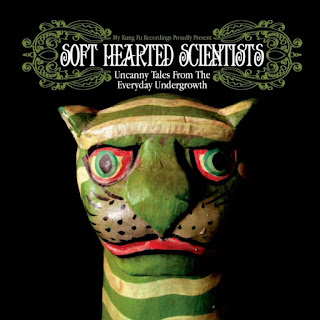 Long out of print debut gets reissued with previously unheard demos! Pulp meets Pink Floyd for a peppermint tea!

I came across Soft Hearted Scientists ashamedly late, around the time of their fourth long-player Wandermoon, a lovely album that still offers fresh insights with each listen. A further two albums, both equally rewarding, have since followed and the band are now tantalisingly close to releasing their seventh - Golden Omens. Until then we can content ourselves by checking out where their journey started.

As with most bands there's something special about first albums, those records that somehow capture the initial flurry of ideas and enthusiasms and can be almost manifesto like in terms of setting down a band's identity. Such is the case with Soft Hearted Scientists' Uncanny Tales From The Everyday Undergrowth, their debut album from 2005. Critically acclaimed on it's release, it's long been out of print but is now getting a release on The Hip Replacement label. Along with the original record this reissue comes with a second disc containing demos of the songs on the album.

It's reassuring to find that the band's trademark mix of gentle and quirky melodies mixed with garden shed experimentalism was present at the get-go. The band describe their sound as kitchen-sink psychedelia, citing The Beach Boys and (perhaps more importantly) Oliver Postgate among their influences. Kitchen-sink psychedelia is pretty much bang on the button but I'd also propose the album is akin to Pulp meeting Pink Floyd to put the world to rights over a peppermint tea. An album of lovably eccentric songs with a softness of heart at their core. If you're new to the band start your journey here.

Clickhere for Soft Hearted Scientists' website.
at 14:09 No comments: 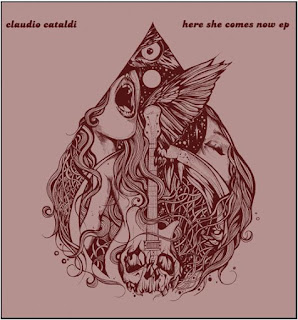 Sicilian songwriter's tribute to the Velvets!

The ever-expanding smorgasbord that is Fruits de Mer's back catalogue gets even more tasty with this latest 7” from Claudio Cataldi, a singer-songwriter based in Palermo in Sicily. He may be familiar to FdM fans from his cover of Syd Barrett's 'She Took A Long Cold Look' which the label released a year or so ago. He's now turned his attention to the Velvet Underground with a beautifully lo-fi bedroom take of 'Here She Comes Now'.

Cataldi's take on the Velvets classic is backed with three Cataldi originals, one of which, 'All My Friends Are Here', is unavailable elsewhere. It mixes US slackerdom with homespun baroque-folk warmth, and will appeal as much to fans of J. Mascis and Elliot Nick Drake as those of Barrett and the Velvets. To my mind it's the best of the label's April releases. Do check it out, along with Claudio's back catalogue via the links below. 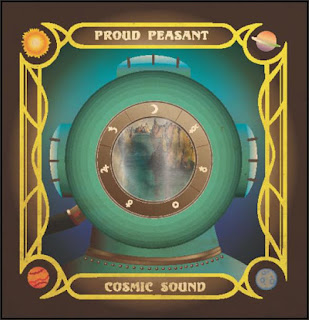 Visit the heady days of 1973 via this 7” coloured vinyl disc!

A new band to me but very welcome, Proud Peasant are a perfect fit on Fruits de Mer Records with their brand of '70s-inspired progressive rock. This limited edition 7” sees them give their take on two instrumental tracks from 1973; a taut and driving cover of Eloy's 'Daybreak' on the A-side, with a version of 'Saturn, Lord Of The Ring/Mercury, The Winged Messenger' (originally by Manfred Mann's Earth Band) on the flip.

Despite their love of '70s UK/German music, the band actually hail from Austin, Texas, a city which has its own reputation as a psychedelically creative hotspot. This release further cements that. Virtuosic and even a little proto-punk in places, both sides are a treat for lovers of classic progressive rock. For further investigation check out their critically acclaimed debut LP Flight. More details on the band's website. 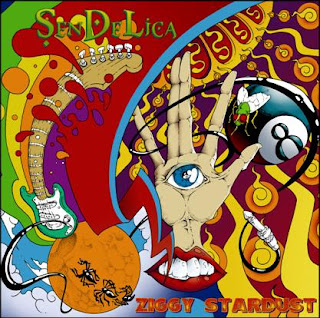 Welsh spacerockers' tribute to Bowie gets released on 7” vinyl!

As the we adjust to living in a post-Bowie world, and try to work out what that might mean, the column page tributes continue to pile up. Save for Lady Gaga and Lourdes there haven't been that many musical tributes. Fruits de Mer Records released a timely Bowie tribute CD at the tail end of last year for their regular customers. Whether the man himself ever got to hear it is unclear. It's comforting to think he might.

Sendelicahad a live acoustic version of 'Ziggy Stardust' on that compilation but it's a seven minute studio version that's getting a stand-alone release on 7” vinyl next month. It does not attempt to recreate Ronson's crunchy glammed-up guitar chords that give the original it's pomp and purpose, opting instead for a slower, more ethereal and atmospheric take. The yin to Bowie's yang is provided by the layered female vocal. The B-side is an equally enthralling remix by Astralasia's Marc Swordfish. Both sides honour Bowie's preference for the new and experimental over anything tried and tested. David would no doubt have approved.