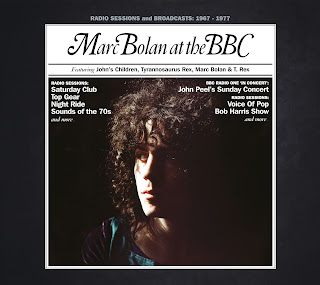 
Celebrate Summer indeed! This August sees the release of a 6CD box set of Marc Bolan's session recordings and interviews for the BBC. You'd have to be a real sourpuss with a dislike of classic pop music to not like the records Marc Bolan made with Tyrannosaurus Rex and T.Rex. From the folksy beginnings and on into the brash 'n bluesy classic Glam period. Even on into the later years where an influence of contemporary American soul crept in, you have to admit the guy could write and record great pop music. What joy then to hear that Universal Music have put together this set featuring pretty much everything he recorded for the nation's favourite station Radio One. Sessions for Saturday Club, John Peel's Top Gear, and In Concert are included along with sets recorded for Peter Powell, Dave Lee Travis, Bob Harris and "Diddy" David Hamilton.


For a more detailed description of what the set contains, click over the jump for the full press release.

Beau - Twelve Strings To The Beau 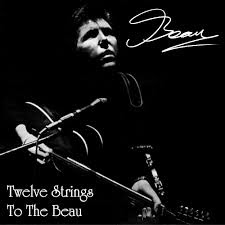 We all love a lost album story don't we, usually those featuring shelved classics such as The Beach Boys' Smile or Dylan & The Band's Basement Tapes. Though not as well known as those artists, singer-songwriter Beau occupies a pretty hip position within the parameters of Brit-folk, as having recorded the very first release on John Peel's Dandelion label. This 7” single, '1917 Revolution', was followed by two well-received albums for Dandelion.

A third album was recorded at Tractor Sound Studios in Heywood Lancashire. Before Beau could secure a release for this album real life intervened, prompting promotion at work and the relocation of his family. The recordings were shelved, perhaps not forgotten about, but certainly not listened to.

Fast forward 38 years to the digital age and a random blog post about Beau sees connections and deals made. The “lost” third album gets a release courtesy of The Sound Of Salvation label. Featuring simply Beau's singular voice and trademark twelve-string acoustic guitar, the music lies somewhere in Dylan's long shadow. Traditional folk song forms with a sometimes political, sometimes introspective bent it owes much his Bobness' Another Side Of album.

Though very much a product of its era, it's aged pretty well. There's a Donovan-esque naïvety on some tracks that today's smug smart arses might scoff at but that's part of its charm. And the sparse arrangements let you soak up the lyrics, which what the record is really about. Wordy, literate, informative and as beneficial as a slow release pill. Subject matter is diverse, ranging from colonialism, war, industrial action as well as the problems of Leeds' drainage system. There's also room for a love song or two. Give it a listen on a relaxed, balmy summer evening with a glass of something nice and it will all make sense. Beau is still making music so go catch him at a gig if you get the chance.