If psych-tinged British guitar bands are your thing (and why wouldn't they be?) we have a great recommendation for you. The Paperweight Array are a Northampton-based trio who've just released Greek Theatre Show, their third EP, via Bandcamp. We've written about them before having enjoyed their debut EP Transmissions From A Distant Star. The follow up Kaleidoscope Of Antiquities was also on our radar but somehow slipped through the net when it came top writing about it. (Must have been a busy time work-wise, that's what usually stops me posting more!)

Anyhow their latest is well worth a listen. The opening track 'The Mountain' is reminiscent of Ride at their floppy-haired best, a mix of irresistible rhythms and spiky guitars. The title track 'Greek theatre Show' follows with more of a mid-'60s folk-rock feel. Lyrically it explores the volatile minefield of fractured friendships before leading into an extended coda of modal guitar arabesques.

They save the best for last however - 'Reflections (On A Western Trail)' has a Seahorses-meets-Big Star vibe, seemingly simple but actually quite complex chords and melody and ends in an extended guitar solo that any aspiring axe-god would be proud of. All of the band's releases are available via Bandcamp so go check them out. Here's hoping a long-player will materialise sometime soon.

Us and Them - On Shipless Ocean 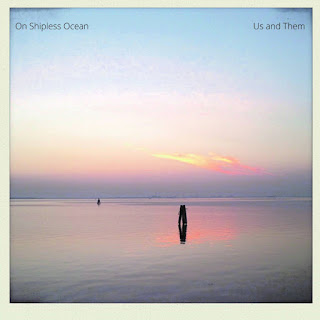 Us and Them are Britt Rönnholm and Anders Håkanson, a musical duo from Sweden who make beautiful, soft and fragile acid-tinged folk. We've featured their music several times before on HD, most recently when they released 'When I Was Walking', a limited edition 7” single on Mega Dodo Records early last year. Their music is perfect for quiet reflection and seems fitting that as we approach the high summer solstice and the turning of the year's tide they're back with a full-length LP also released by the increasingly reliable Mega Dodo label. On Shipless Ocean is Us and Them's strongest and most confident release to date.

The pair's primary influences are never far from the surface – musically there's Sandy Denny and Vashti Bunyan, subject and theme-wise there's Northern Europe's natural world of climate, weather and the elements. Listen deeper however and there's more to heard - Echoes of Angelo Badalamenti's Twin Peaks theme in album opener 'The Trees and the Sky Above', and a gentle smattering of ghostly electronica throughout. For all the ethereal beauty there's also a constant worldliness best evidenced on 'A New Life' which offers dignified lyrical stock-take of everyday emotions.

Us and Them's previous releases have contained cover versions, most notably the 10” tribute to Sandy Denny which came out of Fruits de Mer a few years back. On Shipless Ocean is more centred on original tracks but does contain one cover, an expansive ten minute version on Kevin Ayers' 'Lady Rachel' where the muted electronica meets exquisite finger-picked guitar. Other highlights include 'Changes and Choices' where the albums instrumental palette expands with various shades of woodwind, and 'Tail', a nine-minute opus complete with Robert Kirby-esque strings.

Fans of any of the artists mentioned will find in Us and Them new torchbearers for the sort of acid-tinged folk that gets more resonant with each passing year. For a sound that supposedly only shone briefly in the late sixties/early seventies it's proved its resilience and Us and Them make fine modern-day custodians.

Vinyl lovers will surely want to get hold of the 180-gram aqua marine coloured version, limited to 300 copies only.

The Left Outsides - All That Remains 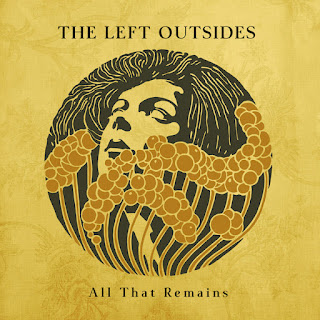 It's a good few years since I lived in London. And to be honest I don't miss it that much. Well that's not entirely true, there are certain things I miss about it. Spending a lazy Saturday afternoon in a civilised London boozer, nursing a pint, reading the paper and perusing a few vinyl purchases is pretty much a perfect afternoon in my opinion. Red buses going past outside as the football results come in. Ah I'm getting all misty-eyed just thinking about it. I am at heart however a country boy, clean air, rivers and chalk hills hold just as much appeal these days. And I'd struggle to pay those London rents let alone have money left for a Saturday pint or two.

There is one thing about modern London that does make me wish it was in easier reach. There are some fantastic bands doing the rounds there right now, playing the capital's venues regularly. It seems today's London is experiencing something of a purple patch with regards to grass roots music. Thankfully I get to hear these bands via the records they put out. Recent releases from Green Seagull, The Hanging Stars and The Cold Spells have all hit the spot. Another name to add to the list is The Left Outsides. Their recent long-player All That Remains has been a Bandcamp favourite of mine over the last few weeks.

Genre-wise I'd go with folk-rock but really they're all about great songs, beautifully sung and played. There's a timeless quality to their album. The songs could have surfaced in the late '60s/early '70s and would have fitted in with the likes of Fairport Convention, Pentangle et al. Or they could be old English folk songs from a century before. Or, as is the case they're getting their first airings in 2018 and will still sound fresh as the seasons turn and the years pass. The only thing that places the songs in the here and now is a lyric that refers to taking a bus trip in the 1970s. Interestingly this is backed by electric guitar chords that echo 1976's summer of punk. That aside the lyrics have an elemental, earthy yet spiritual quality.

So who's behind these sounds? Alison Cotton (viola/vocals) and Mark Nicholas (guitar/bass/keys/vocals) were members of The 18th Of May and are in Trimdon Grange Explosion, another fine London band who put out an eponymous LP last year. The Left Outsides recently toured supporting Robyn Hitchcock. A damn fine gig billing that. Oh and Alison also contributed to Through Passages Of Time, the ace hauntological album by The Hardy Tree that came out a year or two back. London, it always changes but always delivers. 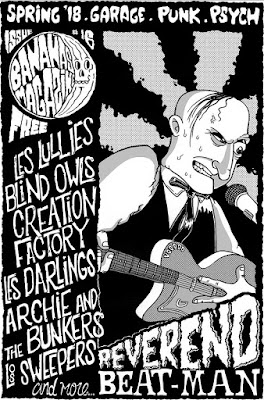 2018 is rapidly approaching its midway mark. It's been a weird one for me so far, a few profesional breakthroughs but more than enough day-job ennui, usually experienced with the added impairment of a hangover. So yeah too much booze, too much work and moments of true joy few and far between. That said the new music I've heard this year has been pretty special. I've spent more money on vinyl this year than I have the previous few years put together and I've not regretted a penny. I'm not sure how you readers (I'm presuming there are some!), come across new bands and records. Don't get me wrong, the internet can be a wonderful thing and I use Spotify, Twitter, YouTube and all the rest of it and occasionally come across new music and bands that way, but there's no substitute for good old printed paper, curated content and stylistic parameters.That's why it's always such a pleasure to read a new issue of Bananas Magazine. For the latest in global garage rock nobody does it better.

The latest issue dropped through my letterbox last Saturday and truly brightened my day. I took it along to the pub that night and read through some of the great record reviews and interviews while my mate's band were soundchecking. Great to see HD faves The Blind Owls get a feature. Their latest Four EP was one my recent vinyl puchases by the way! There are also some fabulous pieces on Archie and The Bumkers, Les Sullies, The Creation Factory, Reverend Beat-Man and more. Bananas magazine always has the greatest illustrations, the artist spotlight interview with artist Matt Adams is fabulous too. Makes me wish I could draw! As ever the've put together a Bandcamp compilation to accompany the issue. Check it out below. In a time when politicians from every country seem to be getting more and more insular, protectionist and nationalistic, it 's encouraging to see musicians and music fans in favour of disregarding boundaries and borders and fostering a truly global inclusive attitude. More of it please!