Datura4 – Blessed Is The Boogie 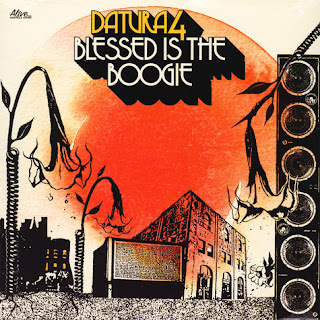 West Aussie rockers get deep down in the groove on their third long-player.


“Who are your main musical influences?” - It's a simple question to ask but a truly honest answer would offer much more than just a list of famous bands. It's a point made in Joe Jackson's autobiography A Cure For Gravity, where he says his biggest influences were the people he spent time making music with in his early pre-fame bands – players who may not be famous names but were in a position to offer insights about technique and taste, about how to play sympathetically, and about band dynamics.

I was reminded about this when reading the press release for this third album from Datura4, where bandleader Dom Mariani pays homage to the local bands and musicians he grew up hearing in the pubs and clubs of Perth and Freemantle on Australia's west coast during the 1970s. Bands such as The Aztecs, The Coloured Balls, Sitting Bull, The Master Apprentices, Daddy Cool and Carson. Household names they may not be, but they must have been pretty special to have inspired Mariani's lifelong dedication to making kick-ass rock.

Blessed Is The Boogie is Datura4's third album, following Hairy Mountain (2016) and Demon Blues (2015). It's an album that will appeal to those who like their music to be heavy, but not at the expense of tunes or funk-filled grooves. Taking the foundations like by boogie godfathers such as John Lee Hooker and cranking the amps up to eleven, Datura4's sound has all the hallmarks of classic heavy rock – twin lead guitar lines, a hard-working rhythm section laying down chunky solid riffs and beats. Throw in the heavy textured chords of a Hammond B3 organ, and right there you have some serious sonic chemistry going on.

Aside from the no-nonsense boogie rock alluded to in the album title we also find polished and sentimental FM rock on 'Not For Me', along with a nod to their musical roots with a cover of R&B classic 'Oop Poo Pah Doo', a song written by Jesse Hill in 1960, later covered by the likes of Ike and Tina Turner, Wilson Pickett and garage bands such as The Standells and The Kingsmen.

An interesting twist and side story to this album is that Mariani now owns the black 1969 Les Paul guitar previously owned by Sitting Bull's now sadly-departed guitarist Paul Fulton. The guitar was used throughout the album. Funny how things come full circle , it's a nice story and fitting dedication to Mariani's primary influences. And the guitar is in safe hands - Mariani knows how to play it, drenching this record with pure-toned guitar solos throughout.

In rock music terms Blessed Is The Boogie has a sound as old as the hills but hey, it still sounds great to me. Tags such as retro or contemporary are rendered meaningless when you crank up the volume of your stereo and tune in to the tunes, and nuanced songwriting. For those who like their rock heavy and deep grooved. Good work fellas.