The Embrooks - We Who Are 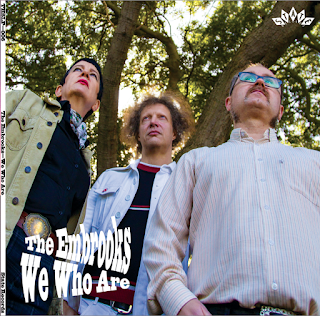 The freakbeat goes on! Limited edition LP out now on State Records!


Bands have down-time or even split up for a while, but when the time feels right to make a new record the good ones will deliver. Case in point is this new record from The Embrooks. The band originally formed in 1996, split in 2005 and reconvened a couple of years back to record a new 45, the success and positive reaction to which led to this brand new album. We Who Are is the fourth album from the band who comprise of Alessandro Cozzi-Lepri (guitar, vocals), Mole (bass, vocals) and Lois Tozer (drums).

Whether or not the title is a cheeky reference to Messrs Townshend, Daltrey, Entwistle and Moon is unclear. The two bands may share the same three-piece instrumental line-up and much like the mid-'60s Who, The Embrooks make music that mixes hard-driving R&B with a slight experimental edge, but there the similarities and sly references end. This is most definitely an Embrooks album, not a slavish pastiche.

It features the previously mentioned 2016 single 'Nightmare' along with eleven brand new tracks. 'Going But Not Gone' and 'Don't Look At Me' find the band at their garage rock finest, their sound embellished by some nicely reedy keyboards on the former and inspired addition of woodwind on the latter. 'Human Living Vampire' has more of a moody US-garage sound, twelve-string twang and minor chords. 'Have You Ever Loved Somebody' is the album's strongest contender for a single - the sort of track that pirate radio stations would have traded lifeboats for back in the day. It has a chorus that's stickier than Unibond's No More Nails.

'Riot On Kingsland Road' places the action firmly back on terra firma and in 21st century London. It features, flutes, police sirens and the sound of breaking glass along with lyrics about the 2011 riots. 'Baby From The South' is stomper that both highlights the band's debt to R&B and allows Alessandro to indulge in some wild guitar solos. Other standouts include 'Peace Of Mind' which finds the band locked into a hypnotic psych-rock groove, and album-closer 'You Can If You Want' which signs off the record in fine freakbeat style, complete with clattering drums, crashing guitar chords and a wailing harmonica.

It's been a long wait since the band's last album (2004's Yellow Glass Perspections), but in the interim they have been active elsewhere – The Galileo 7, Thee Jezebels, The Baron Four, The Jack Cades are just some of the combos to have benefited from some Embrooks input. As special as each of those bands are, the unique chemistry of The Embrooks is undeniable on We Who Are.

A note for vinyl fans - I'm not sure which pressing plant the label has used but the vinyl copy is a real beauty. Weighing in at a reassuringly chunky 180g and with a quality cut and pressing that labels ten times the size rarely attain. Not only that, the record is housed in a gatefold sleeve and comes with a CD version and download for those that like to listen on the move. Nice work. The Embrooks, we salute you!

Email ThisBlogThis!Share to TwitterShare to FacebookShare to Pinterest
Labels: Alessandro Cozzi-Lepri, Lois Tozer, Matt Lambert, Mole, State Records, The Embrooks, We Who Are

Interview with Jonas Waaben from The Sonic Dawn 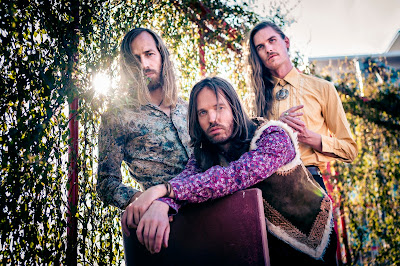 (This feature first appeared in issue #87 of Shindig! magazine. For the full unpublished interview click over the jump at the bottom.)

“A lot of the album is about the end of the world, the idea that everything is coming to an end, we're fucked with the climate crisis, there won't be enough food around in a few generations, all those doomsday ideas which have a rational foundation,” says Jonas of 'Forever 1969', the lead single from The Sonic Dawn's new album Eclipse. “But change on a major level is possible if people come together. In 1969 you had Woodstock, also the largest peace marches against the Vietnam War, all that stuff. It's possible to turn the shit around, that's the message of the song.”

Drummer Jonas along with childhood friends Emil Bureau (vocals/guitar) and Niels 'Bird' Fuglede (bass) formed the band in Copenhagen in 2013. Eclipse is their third album, one which focuses on the art of the song. “We tried to really sharpen the concept for each song, make it sharp and shorter. On the previous albums we definitely had longer escapades whereas here we tried to go where we wanted to go immediately... Eclipse is in a way back to the roots of our own inspiration, a lot of that is sixties music. We admire that strange combination of a short, three-minute pop format song that can be trippy as fuck!”

The influences of The 13th Floor Elevators, Red Krayola, Country Joe & The Fish and more can all be heard on the album. Another defining feature is its subtlety and grace, achieved in part due to the tastes shared with producer Thomas Vang. “We tried to accomplish something far removed from a stadium rock sound or a modern, hard-hitting, bass-driven rock sound. It's much easier to work with someone like Thomas, he's a trained jazz musician and has produced a lot of jazz records out of his studio. He has a much better natural feel for how the group sounds in the room and how to capture that. Then we will try to push it further production-wise - 'hey man we need way more echo here' or 'it needs to get crazier.' But a good natural sound for the drums, he has an ear for that.”

The band are hitting the road hard in 2019 but a word of warning to anyone who hitches a lift with the trio - “If we see a hitch-hiker we will pick them up and continue playing stuff like Trout Mask Replica or Red Krayola or Beat Of The Earth. Just insane music and nobody will say anything. The hitch-hiker will just sit there frozen - 'who are these maniacs!?' haha! It's a very delicate form of torture, one that I take great pleasure in I must admit!”


Eclipse is out on February 1st on Heavy Psych Sounds

(Click over the jump to read the full unpublished interview) 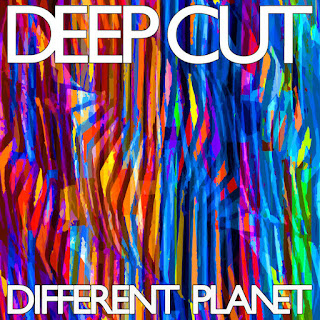 I have to admit I've only recently become aware of Deep Cut despite this being their third album, but my interest is more than piqued! A quick history - the band formed in 2006 since when they've put out a couple of long-players – the excellently-titled My Thoughts Light Fires (2009) and Disorientation (2011). The band's main songwriters are Mat Flint (ex-Revolver) and Emma Bailey. Mat's brother Simon plays bass and Ian Button (Death In Vegas, Papernut Cambridge) is on the drums. After an extended break the band are back with a new album. Different Planet came out a couple of weeks ago on the Gare du Nord label.

I've had the album as soundtrack for my commute to and from work on these recent cold dark days and it's helped keep any seasonal affective disorder at bay. The band's influences are many, easy to detect and proudly worn on their sleeves so to speak. There are traces of The Byrds, Velvet Underground, Cocteau Twins, early Primal Scream, House Of Love, Phil Spector, Sarah Records, Lush, Motown and The Jesus And Mary Chain. But as we all know influences are only half the story, it's how they're mixed and presented that matters. Different Planet contains ten tracks that are catchy, infectious, energetic and engaging.

Take their track 'No' which opens the album. Cheeky little steals from either The Byrds 'Eight Miles High' or Coltrane's 'A Love Supreme', and the VU's 'I Can't Stand It' underpinned by pounding beats, jangling guitars before building into a wall of noise containing riffing guitars, handclaps, and those awesome boy/girl harmonies.

If you want to pigeonhole the record Indie, Dreampop or Shoegaze would be most apt given the shimmering textures and effect-driven sounds that permeate the album, though categorisation is only half the story. What really impresses is the distillation of influences, bold production and strong songs. Neat work indeed. 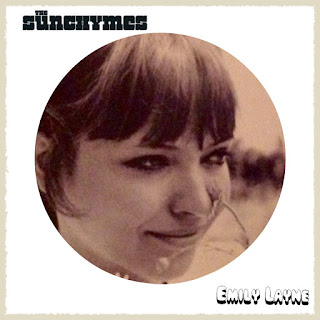 Always good to have new music from HD faves The Sunchymes. While the title may strike you as a mash up of two of Syd Barrett's finest tracks the music owes more to Brian Wilson. Full of melodic twists, harmonies, neat guitar solo and that quirky chorus. It's a ray of sunshine for a cold February day. Yes I guess you could say I like it!

The Sunchymes is the brainchild of Aaron Hemmington, a Northampton-based music maker. 'Emily Layne' is the latest creation in an ever-growing catalogue of breezy yet intelligent, highly catchy psychedelic pop. You'll be pleased to know this is just the tip of a very cool iceberg (haha!), head over to The Sunchymes Bandcamp page to check out plenty of other great tunes. You'll be glad you did. Happy listening peeps! 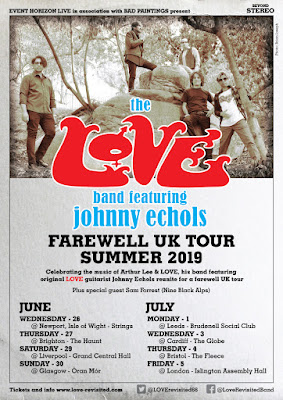 From 1993 until Arthur’s death in 2006, the band Baby Lemonade performed with him, being an essential part of the renaissance of LOVE’s music. This iteration of LOVE saw many sold out tours, as well as back to back Glastonbury performances and an appearance on Later With Jools Holland.

Joining Baby Lemonade is LOVE’s original lead guitar player and founding member Johnny Echols, who was part of the classic line-up that recorded the seminal FOREVER CHANGES.
Johnny Echols and Arthur Lee were childhood friends whose families both moved from Memphis to Los Angeles. Teenage Johnny & Arthur teamed up to form the groups Arthur Lee & The LAG’s and The American Four before they formed LOVE in 1965. The classic LOVE line up featuring Johnny disbanded in ’68. Johnny reunited with Arthur Lee in 2005 to perform with LOVE once more.

Baby Lemonade formed in 1992 by Rusty Squeezebox, Mike Randle, David “Daddy-O” Green, later adding Dave Chapple to the mix. In ’93 the band landed the gig of a lifetime opening up for LOVE. That show was the last for that incarnation of LOVE as Arthur replaced them with the four Baby Lemonade members. Baby Lemonade released records on Sympathy For The Record Industry, Munster and Big Deal between ’93 and 2001.

After nearly six years in prison, Arthur’s case was overturned and shortly after, at his request, Baby Lemonade began rehearsing for what would be non-stop LOVE touring throughout North America, UK, Europe and Australia between 2002 and 2005 where they enjoyed unprecedented success with sold-out tours, back to back Glastonbury performances, Roskilde and Benicassim festival, two sold out shows at The Royal Festival Hall that spawned a live album, and an appearance on the Later With Jools Holland TV Show.

In 2019 The LOVE band featuring Johnny Echols will return for one last UK tour to celebrate the music of Arthur Lee & LOVE.