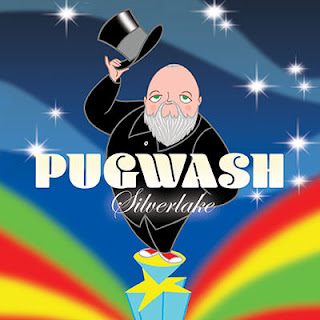 
Regular readers of this here humble blog will know that one thing I particularly like is a song that's genuinely melodically memorable. After all there are lots of records that are sonically pleasing and great enough to listen to, but even after several listens you're hard pushed to actually remember the tunes. That's what makes this latest album from Pugwash such a delight. All eleven of its tracks have such soaring pop melodies, each one strong enough to warrant releasing as a single.

I'm saddened to say I've not had the fortune of stumbling across Pugwash before as this is actually their seventh LP, the band having formed 20 years ago. The man behind the melodies is Thomas Walsh, resident of Drimnagh, South Dublin. For this record he's joined by Jason Falkner of Jellyfish fame. Incredibly Walsh wrote all eleven songs on Silverlake within a week, and recorded them with Falkner producing at the latter's LA studio. If a record as strong as Silverlake doesn't bring Walsh to wider recognition it's difficult to think what would.

At various times recalling and rivalling the pop nouse of Brian Wilson, Jeff Lynne, Paul McCartney and Andy Partridge, the cumulative effect of so many earworms makes this one of the best feelgood albums of the year, or any year for that matter! From the opening summery pop of 'The Perfect Summer' onwards, Silverlake is intelligent, tuneful, heartfelt and wrapped in lush production. Very highly recommended! 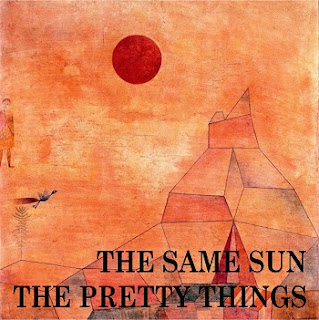 The Pretty Things! Coloured vinyl! Acidic psych-rock! What's not to like!?!

The word legendary is is often mis-used or over-used when it comes to bands. But in reference to The Pretty Things it's apt. Not only have they been around since since the '60s Brit-Beat & Blues Boom, they were the only band (The Beatles aside) to make The Rolling Stones feel threatened. And you can go see them play live without having to re-mortgage your house to do so.

They made some of the '60s most vital records and unlike The Stones they still make music that has an edge. Anyone who doubts this should take a listen to this four song EP set for release early in the new year on Fruits de Mer. The Lead track 'The Same Sun' is taken from their most recent LP The Sweet Pretty Things (Are in Bed Now of Course...). It's a modern psych-rock classic extolling the virtues of communion and wide-eyed wonder.

Next up the band cover The Byrds' 'Renaissance Fair'. As far as I can gather this studio version is exclusive to this release. It's fairly faithful to The Byrds' version albeit injected with a dose of acid-punk attitude.

The two live tracks on the B-side are from the band's box set Bouquets From A Cloudy Sky, thought to be from a late '60s Hyde Park gig. They'll be familiar to fans of the band's '60s output. 'She Says Good Morning' is of course from S.F. Sorrow with Alexandra being from the Electric Banana Sessions.

If you're a longtime fan you'll want to bag a copy of this very special piece of plastic. Newbies are well advised to check it out too. It encapsulates all that's great about one of this country's most marvellous musical treasures.

Two of Weller's deep cuts get a Gallic makeover! All profits to benefit the Teenage Cancer Trust!

There's always excitement round our house when our good friends French Boutik feature on a new piece of plastic. This new 7” comes in a lovely gatefold sleeve, is a tribute to The Jam and all profits will be donated to a charity that benefits the Teenage Cancer Trust (see links below).

To make matters more interesting it's a split single with an act who are new to me but very much worth investigating. The very wonderful Popincourt, I've since discovered, has made a series of records that blend soul, mod, lounge and baroque into a sound that's all his own. On this disc he's covered 'Tonight At Noon' from The Jam's second LP This Is The Modern World. For all Weller's mod credentials even at that stage in his career were clues to his wider tastes. The song's title is pure '60s psych-pop, an element brought to the fore in this dreamy version. Organ, harpsichord and guitar jangle back the almost whispered vocal. A great re-imagining.

The French Boutik side of the single is a French language version of 'The Place I Love' which features on The Jam's classic All Mod Cons LP. It's a great jangle pop take, driven by a lovely sinewy bass line and intertwined boy/girl vocals. Mirroring the psych-pop vibe is some neat backwards guitar towards the latter half of the track. Like all of French Boutik's records this is worth tracking down and is all for a great cause. Get on it!

All profits from this 7” will be donated to Specialized Project which benefits The Teenage Cancer Trust. - www.specializedproject.co.uk