The Granite Shore - Once More From The Top 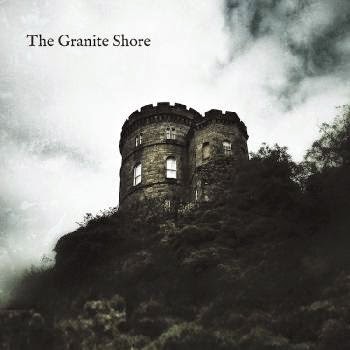 
Nothing quite heightens the poignancy of ageing as experiencing it as a member of a touring rock band. As fashions change and audiences move on for newer sounds, it's as if time's ravages are sharpened. A steep learning curve that shows how life can sometimes move on too quickly, leaving you longing for a recent past that seems like a long-lost golden age. Nowhere is this more the case than for those bands that only fleetingly taste a small amount of mid-level success.

These are the themes explored on Once More From The Top, the debut long player from The Granite Shore. Neatly divided into two halves with self-explanatory titles – In Public, and Behind The Scenes. Musically it's a gentle and understated affair, all slow tempos and muted brass, which along with vocalist/writer Nick Halliwell's closely miked, soft-sung vocals, enhance the album's sense of wistful longing.

The trials, tribulations, hard work and small victories of giving your all to make it in the music world make for good subject matter given Halliwell's literary bent and knack for capturing mood and spirit. Tales of music-biz rip-offs, band members' alcohol intake, and “one-night-stands across East Anglia” somehow sum up the limited, nuanced experiences of everyband.

Once More From The Top shares much with Ian Hunter's Diary Of A Rock And Roll Star, in that things that appear glamorous to the casual observer quite often aren't. Funny and sad in equal measures, its elegiac longing is tempered by wry, dry humour and priceless nail-on-the-head lyrics. The supposedly fictional experiences Halliwell sings of hint at the early '70s, a time when there really was money to be made in the music scene, when there was a thriving circuit of venues with supportive audiences. Over the album's course they also lament their slow decline. It will resonate with anyone who's experienced this either as a musician or a music fan. Enthusiasts of the concept album will also be glad to know that such a thing still exists.


Due for release in May on CD & LP. There are also plans for an accompanying book version.

Email ThisBlogThis!Share to TwitterShare to FacebookShare to Pinterest
Labels: Ian Hunter, Nick Halliwell, Occultation Records, Once More From The Top, The Granite Shore 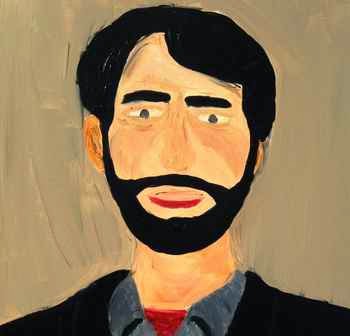 Any piece of 7” vinyl that contains an insert with quotes about freedom from Susan Sontag and Alan Watts already has something going for it, that's before you even place the needle to the groove. Intrigued? You should be.

Harpoon Forever hail from Rutherford, New Jersey and were formed in 2010 by the band's mainstay Alex Goldstein. Together they make lo-fi guitar music that contains echoes of '90s alt-rock yet is imbued with a freshness and enthusiasm that makes them sound utterly contemporary.

The four songs that make up the EP are all anti-fashion, anti-trends and all the better for it. Guitars are played with purpose and spirited abandon, and compliment the intelligent lyrics and from-the-heart vocals. Built around a defiant DIY ethic, this is guitar music that will appeal to anyone who likes their indie-rock slightly left of field.

Think Pavement, think Silvers Jews, even Phantom Buffalo. It's proof that modern guitar music hasn't been completely packaged up and commodified. The sound of a young band searching for an alternative America. Let's hope it's out there. Look out for the band's shows in and around New Jersey and NYC.

A full length LP A Prince For All Seasons is available now via download or stream with a vinyl release planned for later in the year.

Games For May – An afternoon & evening of music at The Half Moon, Putney, Sunday 24th May 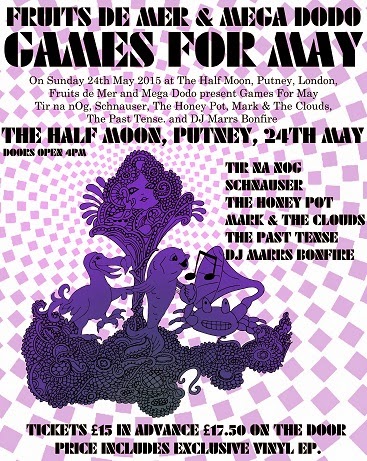 Bank holiday Sunday! Five live bands, a free five-track 7” single + goodie bag! Be there or wish you were!


As if releasing consistently high standard vinyl releases wasn't enough, Fruits De Mer Records have teamed up with similarly reputable label, Mega Dodo, to curate an afternoon and evening of music at Putney's Half Moon venue. This takes place on Sunday 24th of May. For those who don't like going out on a school night, fear not, it's a Bank Holiday the following day! The advance ticket price of £15 gets you a five band billing along with a whole bunch of freebies including - 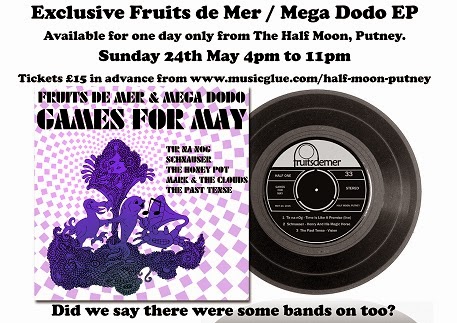 The fun starts at 4pm and goes on till closing time. Along with the live bands there'll be rare vinyl DJ sets from Marrs Bonfire and Cranium Pie's Julian Smith. The event is almost certain to sell out so don't hang about buying your tickets. The five acts playing live (and who feature on the free 7” single) are -

Tir na nOg
Legdendary psych-folk duo formed by Leo O'Kelly and Sonny Cordell in 1970. They'll also be launching The Dark Dance, their first studio album in 40 years at the gig - and there'll be an exclusive 50-run individually lathe-cut 7" available for £10 a time to the first 50 people to buy the album.

The Past Tense
Three-piece band from Worcester Park/Kingston. Their sound is a fusion of mod, '60s beat, garage, psych and punk. Their track “Vision (from Another World” was recorded especially for the event's free 7”.

Crystal Jacqueline and The Honey Pot
Crystal Jacqueline will be familiar to Fruits De Mer aficionados. A founding member of the Honey Pot she'll also be launching latest album Rainflower (Mega Dodo Records) at this gig. We've heard it and it's pretty special, review coming soon!

Mark and The Clouds
London based band that evolved from Instant Flight. Purveyors of '60s tinged power pop though their offering on the 7” has a more folky vibe, all 12-string acoustic and harmonies. Entitled “Any Part Of Town” it's only available on the free 7”. 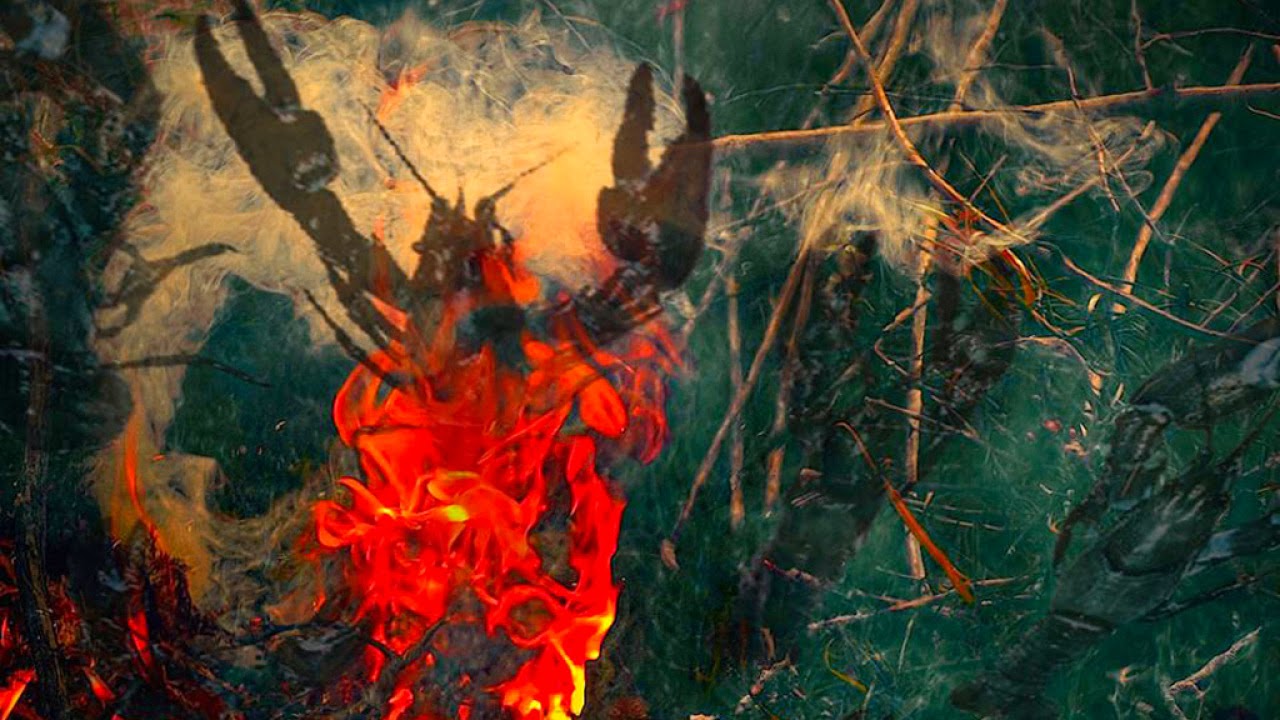 Majestic prog-opus ahoy!Funnily enough it's a follow up to Mechanisms Part One! Who woulda thought?!

Fans of Fruits De Mer Records will no doubt already be familiar with Cranium Pie, the band having contributed tracks to various FDM cover version compilations over the years. Here though we get to hear what the band are really about. Mechanisms Part Two is oddly enough the follow up to Mechanisms Part One, their 2012 album about a battle between civilizations of robots and crayfish. I don't know what the local council are putting in the water in Wiltshire but it may be stronger than fluoride! Either that or we're in the company of a very adventurously creative group of people.

Mechanisms Part One went on to be Classic Rock's “bonkers prog album of the year 2012”, so Part Two has something of a reputation to live up to. Over the four sides of vinyl the band are free to stretch out into the furthest reaches of sonic exploration. With heavy Hammond organ, free-jazz-rock drumming and Brian Blessed-esque vocal passages this is music that calls to mind the giants of early '70s progressive rock – Soft Machine, Zappa and Aphrodite's Child may all be influences, but there are also some other more unlikely musical nods in the album's grooves with some surprisingly funky psychedelia.

It seems there may be just as many Funkadelic, Parliament and Prince records in their collections as there are records by The Nice and Caravan. Side One sees the band co-opt the bass line from Isaac Hayes' Ike's Rap II, with Side Three beginning with wacka-wacka guitar chops straight of his Shaft album. Elsewhere there's music borne out of of intuitive collective jamming. So while it's without question another “bonkers prog album” it's also a surprisingly soulful and funky one.

Like many FDM releases, the vinyl version is sure to sell out quickly so if you've missed out bug them for a re-press of make do with a digital copy. Be warned though – it may fry your brain like no other record this year, albeit in a good way. 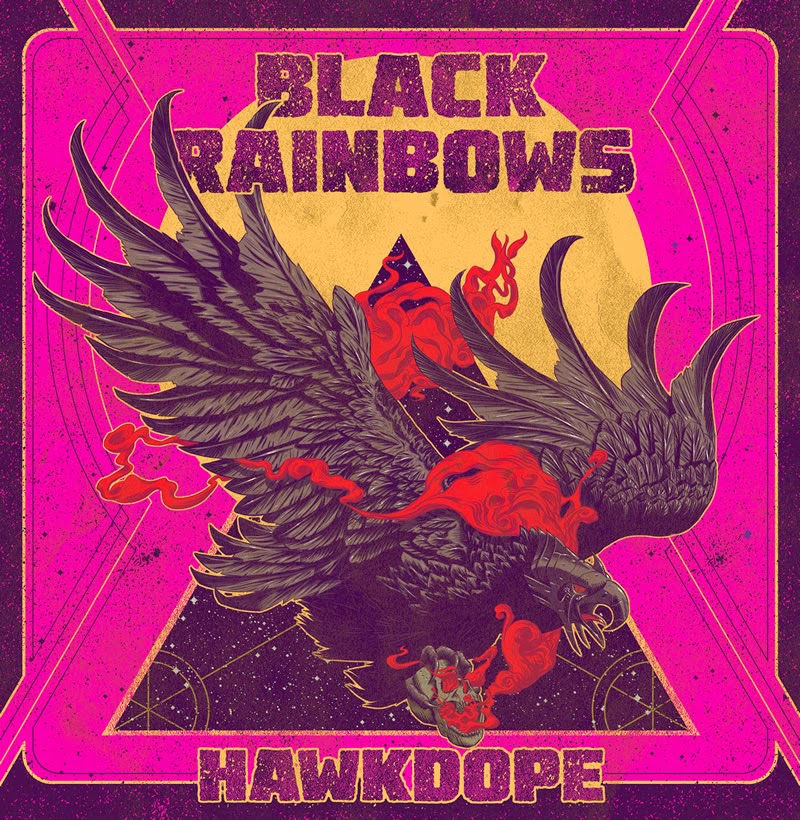 Italian fuzz-rock trio cement their reputation as one of the genre's prime movers. A feast of killer heavy rock with a side dish of mystical musings.


Eighteen months on from the band's Holy Moon mini-LP, Black Rainbows are back! Hawkdope may have less stylistic diversions than their previous outing but it does everything you'd want and expect. A glance at the song titles gives you some idea of what this album contains. With titles such as Killer Killer Fuzz, The Prophet and The Cosmic Picker, you're in for a 45 minute feast of killer heavy rock with a side dish of mystical musings.

On album opener The Prophet they sing of “prophesies being released” over Sabbath-esque riffs, setting the course for the rest of the album. Wolf Eyes kicks off with an amphetime-boosted Tamla drumbeat. Incidentally, what is it with heavy rock bands and their fascination with wolves?!? There's Wolfmother, Wolf People, Wolfsbane. Zep's Robert Plant even supports the football team!

We can forgive a fixation with Canis Lupus when the resulting music hits the spot though. Heavy rock bands of the early '70s are a touchstone, though fans of later grunge and alt-rock will find much to like too. I imagine the live Black Rainbows experience is even more rewarding. The band have an extensive tour booked throughout Spring and Summer including some UK dates in June. (See the flyer below for more info.)

The sole acoustic offering, Waiting For The Sun provides a short, soft break from the biker-friendly rock, but it's heaviness that the band does best. Much like one of their song titles requests - “Hypnotize My Soul With Rock 'N' Roll”. They certainly do that, and then some. A band at the top of their game. 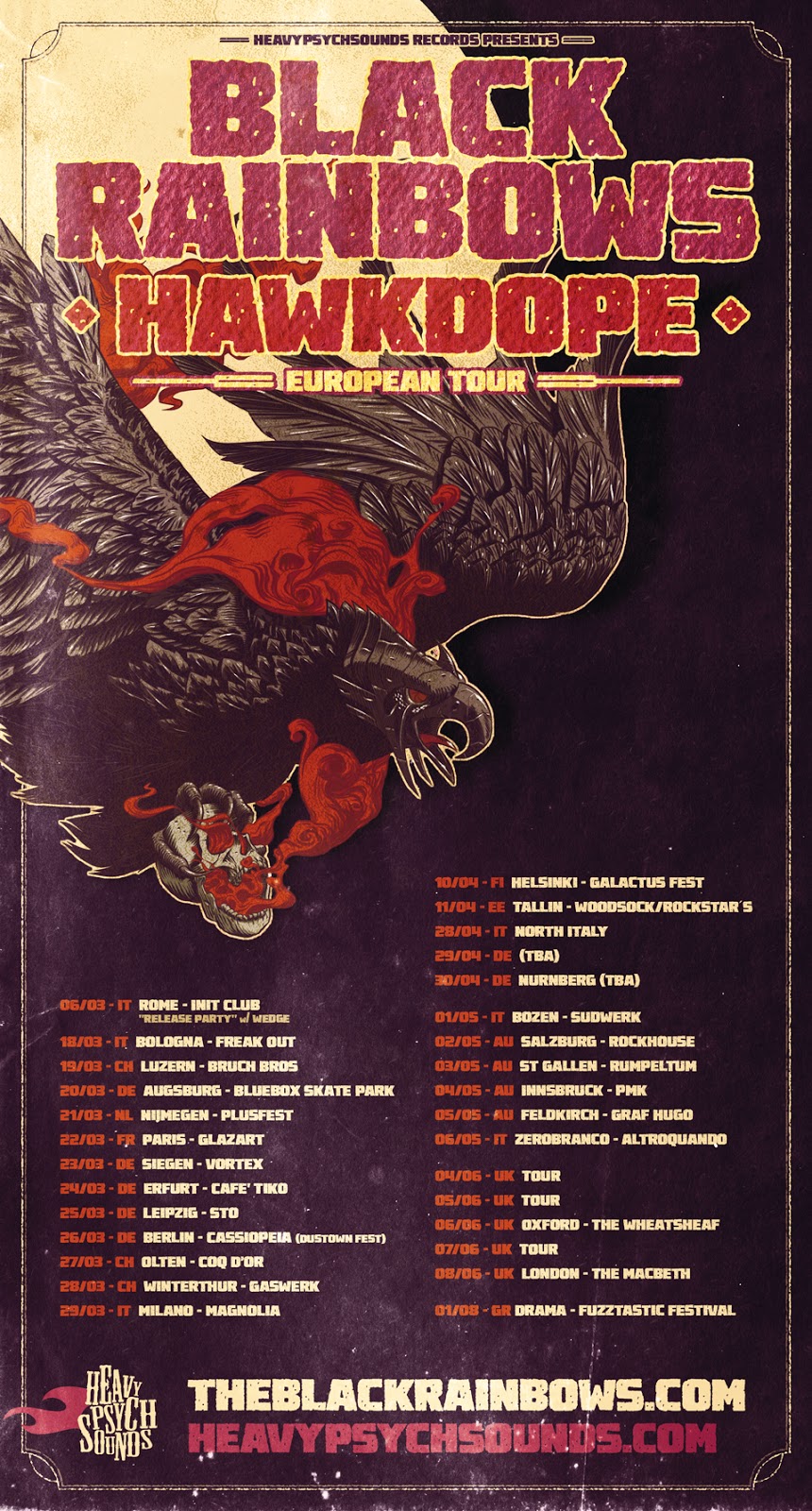 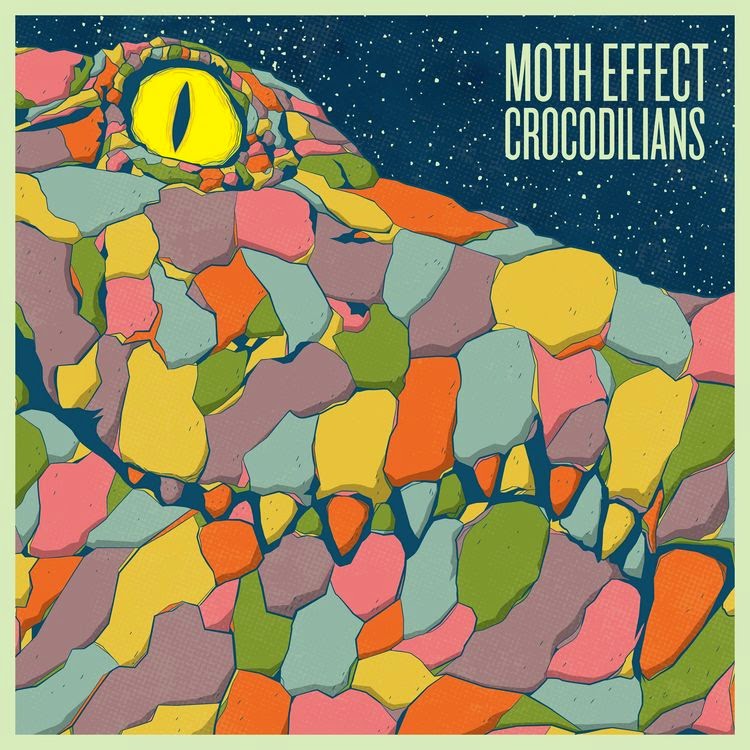 Moth Effect is the recording alias of one man from Sussex That man's real name is Andy Le Gresley. Crocodilians is his first full length release, and is now available on vinyl thanks to the good ears at Sunstone Records. An intriguing wordless affair, it's electronica characterised by drones, repetition, and gradual mutation over gentle mid-tempo beats.

This is psychedelic music that doesn't require a bowl-haircut or a paisley shirt. It's music that takes elements from Kraftwerk, Hawkwind, Durutti Column, Sabres Of Paradise along with countless others, and weaves these disparate threads and strands into a unique tapestry. One that's at times beguiling, yet always interesting and worthy of attention. And one whose rewards grow with each listen.

There's a distinctly European feel, almost Balearic. Beatific too. To call it mood music would be a diservice though it does have a similar effect as watching a a good sunrise or sunset. Not so much comedown music, as happy-where-I-am music. With bass guitar motifs to the fore, guitars and art-rock keyboards are given free reign, avoiding blues scales and cliches, yet searching for sonic invention. This meeting of '90s electronica and exploratory indie-jazz guitar is surprisingly fruitful.

Humour plays a part too. Fingerbobs may reference the early '70s kids TV programme but unlike the folksy, homespun music of that show it takes it's cues from the kosmiche musik that made its mark during that era. Throughout the album you're reminded of “music for schools and colleges” - a soundtrack familiar to '80s schoolchildren everywhere. In this sense Crocodilians has similarities with Lemon Jelly's Lost Horizons album, though it's far less twee and jokey.

The overall feel of Crocodilians is hypnotic, refreshing and curiously optimistic, at odds with current tastes and fashions but all the better for it. It's quite unlike anything else around at the moment. Close your eyes, turn off and float downstream. Or failing that simply head towards the light.