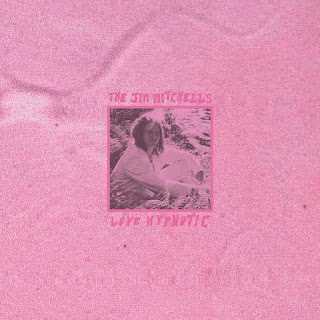 (This review first appeared in issue #81 of Shindig! magazine.)

Sydney-based five-piece The Jim Mitchells have a sound that's from the garage but is refreshingly non-macho and comes infused with a DIY Daisy Age feel. Ambiance and texture share equal billing with melody, and you're drawn in by dreamy sounds rather than bludgeoned by riffs. Described by the band as “an ode to love and mental struggles”, their full-length debut Love Hypnotic is a laid-back, gently intoxicating affair as exemplified on album opener '(Let Them All In)' with its languid beats and sun-dappled guitar lines.

'We're Up High' fuses indie with two-chord raga-rock, all repetitive groove and spiralling guitar. 'Easy Love' is a soothing slice of soft 'n' hazy psych not dissimilar to the music of Allah-Las, whereas 'Got To Believe' sounds like Supergrass taking a hiatus in Haight-Ashbury. A highly enjoyable album, and one that deserves to be part of your soundtrack to the imminent summer of love.

Email ThisBlogThis!Share to TwitterShare to FacebookShare to Pinterest
Labels: Australia, Love Hypnotic, Off The Hip Records, Sydney, The Jim Mitchells