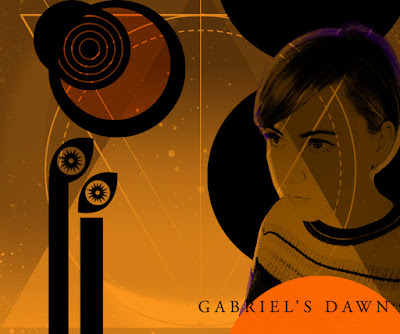 Carrying the baton for jangly guitar pop! Musical sunshine from the Midlands.

I've recently had my faith restored in jangly guitar pop and it's all thanks to Gabriel's Dawn, a band who hail not from the sunny enclaves of Laurel Canyon, but from the mean streets of Leicester and Newcastle under Lyme. The band cite their influences as The Byrds, Love, Buffalo Springfield, through to '80s/'90s indie bands such as Teenage Fanclub, The La's, and on into the 21st century with El Goodo, The Stands and The Coral. It's a thread that pretty much mirrors a large part of my own record and CD collection!

What all these bands and scenes have in common is guitar-based music that's big on melody, literate, and with a non-macho mindset (not "fey" as claimed by detractors). There's also a love for 12-string guitar chime, plenty of arpeggiated chords, and beautiful vocal harmonies. In short it's a kind of musical sunshine. As befitting music that has its roots in '60s folk rock and '70s country rock, the lyrics are as important as the backing, and so it is on Gabriel's Dawn's eponymous debut album.

There's a transatlantic push and pull at play - while wide-eyed wonder of Americana permeates songs such as 'Loose Canyon', it's offset with a defiantly British cynicism and humour elsewhere, most notably via the lyrics of 'Real Love'. Who could fail to fall for a song that references underage smoking, Bargain Booze, staying in bed, and the debris of countless takeaway meals. And it does so while sounding like a lost Stone Roses B-Side - scuzzed-up British bohemia at its finest. Songs such as 'We' and 'I Don't Believe (in The Summer of Love)' battle it out for the strongest earworm award. Which one wins? Well have a listen and decide for yourself. Then again there's the less immediate slow burners such as album closer 'Gentle Chimes', a Byrds-eque take on the creative process which yields more with each repeated listen.

World domination may elude Gabriel's Dawn but I guess that was never the band's intention anyway. One thing I know for sure is that I've feel in a better mood after each listen to this accomplished debut. What more could you want than that!

Available on limited edition vinyl and CD via the band's Bandcamp page from May 30th, and digitally via all the usual platforms from June 27th.