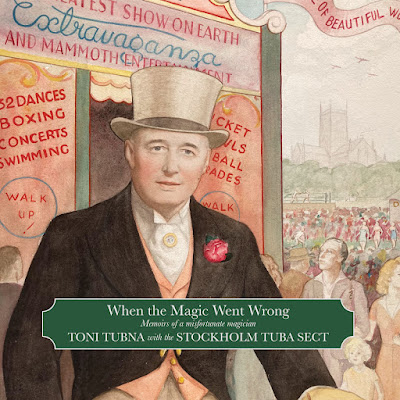 If the mention of concept albums makes you think of long-haired, serious-minded musicians and gatefold LPs featuring sleeve art by Roger Dean, then you're living in the '70s man. Time for a re-think as the concept album is alive and well. Papernut Cambridge's Ian Button has recently released this fine album featuring a set of songs about fictional magician Toni Tubna. (Anagram fans will no doubt work out how Ian arrived at the character's name.)

It all goes back to a running joke that Ian shared with bandmates in The Catenary Wires, about him having a past life as a magician. Over time and and a series of emails back and forth Ian wrote a number of short stories about his spell as a conjuror. Whether that spell was real or imagined matters not as the resulting songs are sure to put a smile on your face.

They're now available on a CD which comes with a mini book containing the stories. Alongside these stories are illustrations by Fay Hallam. All in all quite an immersive multi-format package, one that evokes warped nostalgia and faded seaside glamour – think summer seasons, end of the pier variety shows, old music hall tunes, and that fondness for eccentrics and doomed endeavours that's somehow ingrained in the English psyche.

Anyone familiar with the mighty Papernut Cambridge will know they're in safe hands. Button's melodic and vocal gifts are showcased over a variety of musical styles, be it 'The New Assistant' with its tango feel, or 'The Painting' which comes across as a melancholic English folk song. It's the stories that drive the album however. Be prepared for tales of dubious morals, seedy undertakings, a smidgeon of Shakespeare and encounters with a whole host of supporting characters including, bizarrely, the mayor of Bridlington.

Give it a go, there's nothing else quite like it around at the moment. As Tubna/Button sings on the album's opening and closing songs “It probably never even happened”. Possibly not, but imagining that it did is entertainment enough.